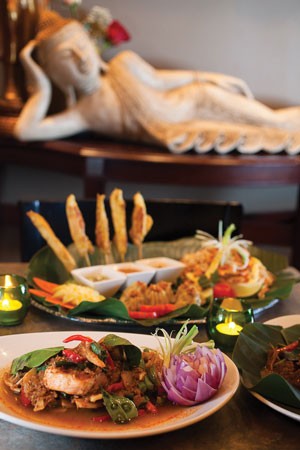 Photo by Renee Rosensteel
Thai to try: a selection of appetizers from Nicky's Thai Kitchen

I'll admit I was skeptical when my girlfriend suggested a year ago that we eat at Nicky's Thai Kitchen. I already had a favorite Thai restaurant, and going to Nicky's, located on the North Side, would mean ... crossing a river.

But after hearing my girlfriend rave about her recent lunch there — the delicious crab Rangoons, the gorgeous outdoor patio — I gave Nicky's a try. Now it's my favorite restaurant.

"My customers are really friendly," Nick says. "Some come every day."

Nick's journey from Thailand to Pittsburgh started in 2001. That's when he left his job working as a business manager of a Thai department store to move with a friend to Kansas City. When his friend opened a restaurant, she tapped Nick to become her cook — even though his only cooking experience came from helping his mother in the kitchen back home

After cooking stints in Kansas City and New York City — "I learned a lot," he says — Nick came to Pittsburgh in 2006. The combination of cheap rent, his business background and his rapidly improving cooking skills led Nick to believe that he could succeed in the restaurant business.

So in 2007, Nick opened his first location. Thanks to glowing reviews — CP reviewers gave it four out of four stars in 2008 — people from all around began making reservations at Nicky's. There was just one problem: "A lot of people told me [Verona] was so far," Nick says.

Nicky's North Side location, which opened in 2008, is as popular as the first. It also boasts one of the most beautiful outdoor patios of any restaurant in the city. Sitting in the garden — a wonderfully landscaped oasis filled with plants and trickling fountains — makes you feel like you're dining in a restaurant in Bangkok.

"It's like a tropical rainforest," says Nicky's general manager Dave Brunner, noting that it took two months to import everything from overseas.

But if the setting doesn't transport you to Thailand, the food will.

"I cook different," Nick says, noting that all of his cooks are from Thailand. Take, for example, Nicky's pad Thai. Nick says his recipe for the classic Thai dish, unlike those of many other Thai restaurants in the States, matches what you'd find if you were dining in Thailand.

With room for just 38 diners inside, the restaurant fills up pretty quickly in the colder months, when the 50-seat patio is closed. Nick says he's considering expanding.

If it means they're missing out on Nick's food, so do I.