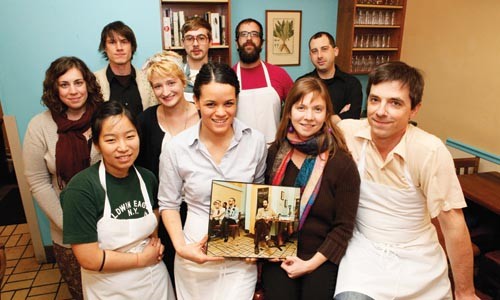 Trevett Hooper, head chef and co-owner of Regent Square's Legume, spends a large part of every week crafting dishes that incorporate locally sourced, organic and sustainably raised meat and produce. But he doesn't expect thanks for it.

"For me, that should be the starting point of good food. I think it's wrong for a chef to constantly hammer at that," says Hooper. "Just like a mechanic doesn't say, 'Look at me -- I got the right part to fix the car!' I try not to name-drop or use the 'slow foods' thing, because good chefs have been cooking that way for hundreds of years."

Furthermore, Sarah Hooper, Legume's front-of-the-house manager, notes that it's not realistic or even possible to use only organic or local foods. Creating the Legume menu involves weighing a multitude of factors: Is it better to get conventionally grown local produce, or organic produce shipped all the way from California? Do you refuse to use citrus in your recipes just because you can't grow oranges in Pittsburgh?

You can tell the Hoopers, a husband-and-wife team who opened Legume in 2007, have put a lot of thought into this stuff. The restaurant's menu, created anew every day based on which fresh ingredients are available, reflects their commitment not only to responsible agriculture but to adventurous, creative cooking. Diners can never be sure what exactly they will find when they get to the restaurant. That's a big part of its charm.

When Legume first opened, Sarah says, "People were curious, but there was a lot more of, 'I had chicken the last time, why isn't the same chicken here this time?' Now a lot more people trust what we're doing. [They say], 'I don't know what this is, but we'll try it.'"

"A good example of the trust is the goat," Trevett adds. "You wouldn't think goat would be a big seller ... but we always sell out of the goat."

Goat is far from being the most exotic item in Legume's kitchen. Four times a year, the restaurant offers an "offal menu," offal being culinary-speak for the parts of the animal most of us try to look away from at the butcher's counter: organs, tongues and so on. The recent fall tasting featured duck liver, lamb kidney, tripe stew and fromage de tête -- head cheese, made from an actual pig's head.

Don't feel that you have to be a daring foodie to eat at Legume, though. For patrons looking for more familiar cuisine, dishes featuring humanely raised lamb from Latrobe's Jamison Farms are a house specialty. And what 'Burgher wouldn't love pork and sauerkraut goulash served with fried spaetzle? "I've been trying to eat less meat, but when you have local, grass-fed meat, it's hard to pass up," says Jay Mangold, one of Legume's repeat customers.

Vegetarians are well served, too. Of the three or four entrees served every night, one is always vegetarian, and dishes like crispy faro polenta with root vegetables, or chevre and tomato pesto might even win over a few meat-eaters. A vegetarian tasting menu every Wednesday is added incentive for herbivores to give Legume a try. And the desserts are simple but exquisite: Recent offerings, for example, have included a green tomato and apple crisp, and warm gingerbread with the bite of real ginger balanced against a huge dollop of fresh whipped cream and slices of quince. All of it's served in a quiet, unpretentious setting by servers who are welcoming and friendly -- something the Hoopers pride themselves on as much as the food.

"It's very beautiful when it's [all] working well," says Sarah.