In 1971, I participated in a community mural. I lived in a hippie-intensive neighborhood where not only was all art equal, but what there was should be shared with the people. Thus everybody, even second-graders like me, got a shot at the underwater-theme mural that went up. I painted a bright pink, flat smiling octopus that had all eight legs running in row. By third grade I was already mortified by my lack of talent, and was relieved a few years later when the whole thing was painted over.

So I'm not meant for creating murals, but I welcome those created by others. And there have been plenty around here lately. Under the aegis of the Sprout Fund's Public Art program, 31 murals have appeared on walls and structures throughout Allegheny County since 2003. There's quite the variety: depictions of people, birds, street scenes and history, ranging from realistic to the fanciful; trompe l'oeil images designed to catch your eye twice; the familiar faces of Mister Rogers and Andy Warhol; murals that wrap around building corners, hide tucked away in neighborhood gardens or loom high over a busy commercial district.

Morton Brown, public art coordinator for Sprout, has been on both sides of the brush, having been a muralist himself. He now oversees the mural program, working with both the sponsoring community groups, property owners, artists and other interested parties.

Involvement throughout the entire process is key, Brown explains. "It's definitely a commitment on the community's part. We talk with them beforehand to make sure they understand that once they put that application in, they're going to commit to maybe four or five months of meetings, before we even start painting the mural.

"We also poll the community beforehand: Are you into abstract art? Street art? So from the get-go, we have a sense of what will be accepted in that community. Then we try to match the best artist to the community. ... People see us painting the mural in four to eight weeks and think that's all there was to it. Well, there was a lot of talking beforehand."

But all that talking pays off. "It's like the community receives a grant," Morton says. "They don't get any money, but they receive a mural. It's a form of revitalization."

Look for more murals in the future -- the application process for community groups and artists begins early next year (www.sproutfund.org). And Brown notes that he's tasked with "public art" not "murals," so there's the possibility that other types of public artwork, such as sculpture or community gardens, will pop up around town. Murals are easiest, though, he admits: "They don't have any sharp edges, they can't fall on you, or be stolen."

Already there's likely a Sprout Fund mural near where you live, work or commute. Several times a week, I stroll past the "Worm's Eye View" mural on the side of Whole Foods on Centre Avenue, in East Liberty. From a distance, the three panels form a whole picture -- a pigeon and a running-shoe-clad foot share a sidewalk. But Kate Bechak's mural also rewards those who might walk to within a few inches of the painting, and take time to notice odder details: The pigeon sports a diamond ring, and inside drops of water, tiny creatures operate machinery.

The day I noticed the tiny workers, I felt like I shared a private joke with the artist. When I asked Bechak, a North Oakland resident who now works as an intern architect, about them, she explained: "I do things in a subversive nature, though not intentionally. Coming from a design background where you have to look out for the desires of the masses, that are nothing like your own desires, it's great to do the opposite."

Indeed, public art does serve many masters and functions, some of them less obvious than others. I feel better about my erstwhile pink octopus already. 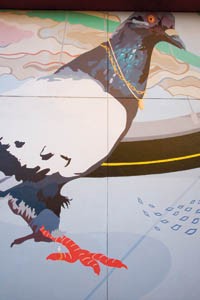