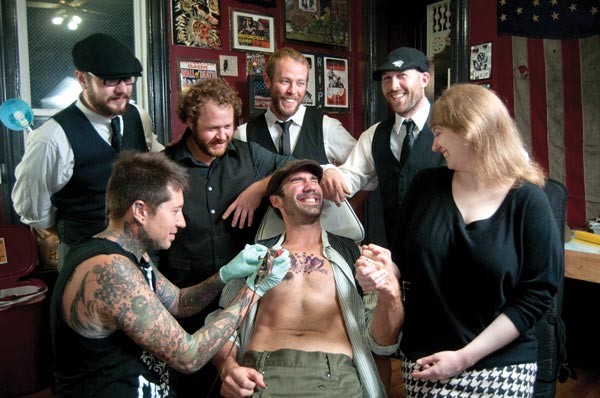 Just four years ago, you wouldn't have needed a ticket to see the Bastard Bearded Irishmen perform their kicked-up variation of traditional Irish music. All you needed was a grocery list.

"We have played in a Giant Eagle produce section," says Jimmy Bastard (a.k.a. Jim Smerecky), lead singer of the group. "We got a call from an entertainment company asking us if we'd be interested in doing it, and we were."

As you might expect, the band performs traditional Irish tunes like "Whiskey in a Jar" and "Molly Malone," but it also plays original songs like "Drinkem, Drankem, Drunkem" and "Mutiny." And while its music has a distinctive Irish flavor, it's seasoned with a heavier, punk approach.

It's a sound the band has been honing patiently for years.

"We've played everywhere — from nursing homes to opening for national acts," says Bastard. "We've just been out there laying the groundwork."

City Paper readers aren't the only ones to notice that hard work. Over the past 18 months, the Irishmen have been getting more high-profile gigs, opening for bands like the Dropkick Murphys, while being lauded by local media and receiving quite a bit of exposure on local radio, especially from WDVE.

Outside of St. Patrick's Day or the occasional Irish festival, you wouldn't think that a band playing Irish music would attract such a large following.

"I never signed an autograph before, but have signed a lot the past two years," Bastard says.  "People have been so supportive; they're over buying merchandise one song into the show."

It's an optimistic trend for a band that started as an effort to honor a fallen friend.

Bastard and bassist Ben Jaber had previously been in another band together, a punk-rock outfit that "had a nice following," Bastard recalls. But its guitarist, George Evans, was killed in a car accident in 2004. Afterwards, his friends got together to play loud Irish music in his honor — and by 2008, the group had begun establishing an identity in its own right.

"Everyone in this band was really good friends with George, they played with him in other bands," Bastard says. "We made up a stupid-sounding name, sang some great songs and at the end of each show, we'd say, 'Let's play another show,' and we just kept going from there."

By the third show, Bastard wrote an original tune and the band began developing its own unique sound. "We're a rock band," Bastard says. "We take what I write, add some banjo and mandolin to it and give it that Irish flavor."

Besides Jaber and Bastard, who also plays the banjo, the band includes Danny Rectenwald on mandolin, Rachel Karras on viola, Jon Pitcher on guitar and Dan Stocker on drums.

"Folks like what we do," says Bastard. "I write what I know — whiskey, beer and women — and we go out and have some fun with it."