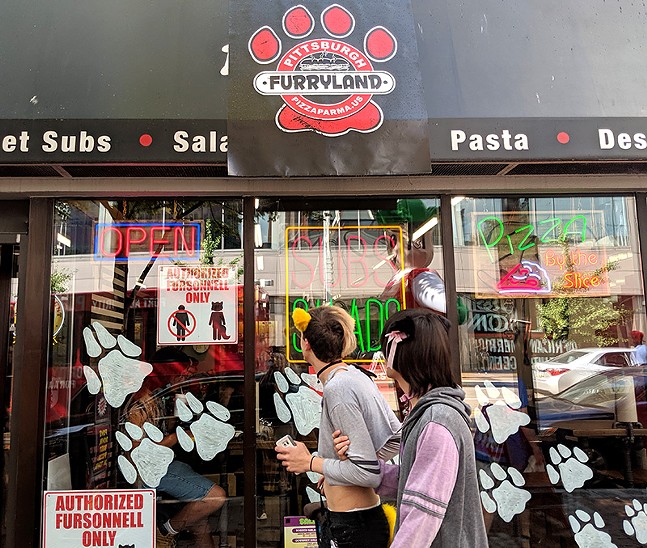 CP photos: Lisa Cunningham
Pizza Parma on Liberty Avenue has been transformed into "Pittsburgh Furryland" for Anthrocon.
The convention that brings thousands of furries to Pittsburgh each year also brings millions of dollars in direct spending to the region. Anthrocon is hosted at the David L. Lawrence Convention Center in Downtown’s Cultural District, and it’s not uncommon to see suited-up furries stopping in nearby shops for a bite or to buy a T-shirt. Want to join them? Here are some of the shops and restaurants bringing in furry customers this weekend.

This pizza shop has gone all-out for Anthrocon for years. This year, Pizza Parma on Liberty Avenue has transformed itself into “Pittsburgh Furryland,” with paw prints painted onto the windows and signs proclaiming that the shop is for “Authorized Fursonnell Only.” 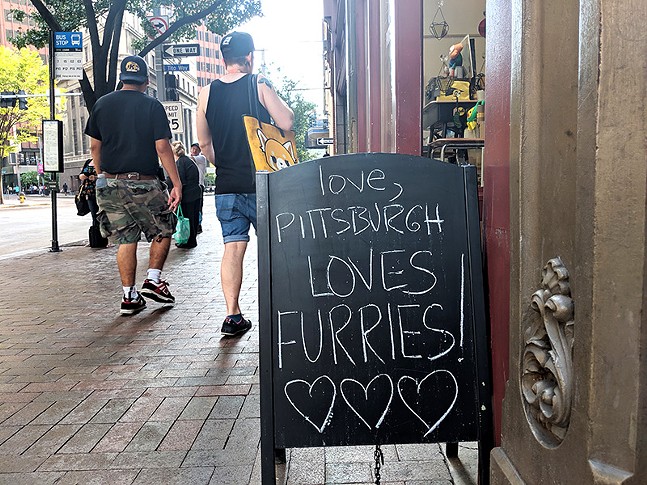 The gift shop love, Pittsburgh carries a variety of Pittsburgh-themed merchandise, so many of its customers come from out of town. This weekend, the shop is courting the furry demographic, with a chalk sign outside reading “love, Pittsburgh loves furries.” 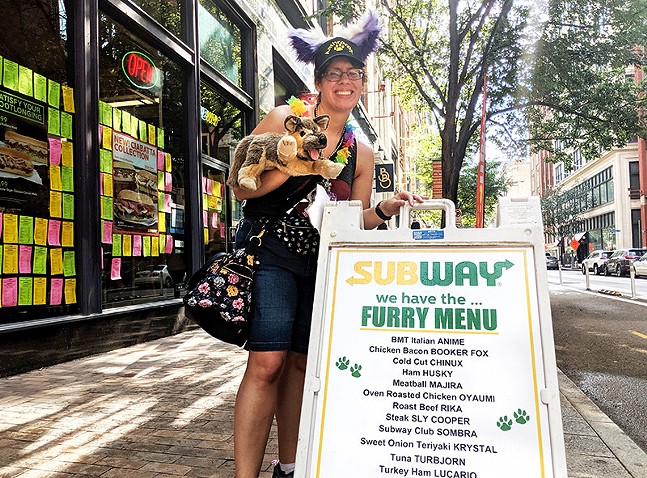 This Subway location closest to the Convention Center has revamped its sandwich menu to a “furry” menu that includes subs like the “Veggie Patty Phoenix Wolf” and the “BMT Italian Anime.” Even if you don’t spot a furry eating there, you can order like one.

Crazy Mocha’s Downtown location is the rare business actually offering furries a discount this weekend. The coffee shop is advertising a 20 percent discount to any Anthrocon badge-holder, making it a popular stop for furries looking for a caffeine fix.

Though it hasn’t completely overhauled its sub menu for the visiting furries, Penn Station Subs on Liberty Avenue has a sign in its window inviting them to enjoy one of the restaurant’s “East Coast subs.”

Anthrocon endorsed Condado as the convention’s taco shop of choice on Twitter, telling attendees they “MUST” visit the Midwest-centric franchise. Condado’s menu features a selection of margaritas and a build-your-own-taco model.

Thanks for all the responses--we are thrilled to see overwhelming support for tacos! And if you want good tacos, you MUST go to Condado across the street from The Westin.

Anthrocon hosts events until midnight each night of the convention, but furries who want to get a taste of Pittsburgh’s nightlife might stop by the 941 Saloon on Liberty Avenue, which has placed a VisitPITTSBURGH welcome sign in its window. Cheers to your new Furry friend!

Music bar Howl at the Moon is another bar with a VisitPITTSBURGH welcome sign in its window. And the bar already has a wolf in its logo, so furries might feel right at home.

Our editor Lisa Cunningham happened to be on a coffee break when an employee brought out a plate of sample Furryccinos on Wednesday afternoon, the day when furries first started checking into the nearby Westin hotel. It's a sweet bright pink frappuccino, with whipped chocolate on top. Furrylicous!