We men pride ourselves on being risk takers. We go for it on fourth-and-one. We start wars based on dubious intelligence. We invest heavily in derivatives.

But when it comes to fashion, when we have a choice between taking a chance and playing it safe, we tend to settle for the latter.

"Some guys are afraid to take a chance," says Michael Barone, owner of Moda, in Shadyside. "They stick with what they're comfortable with."

On the other hand, judging from our readers' poll, one of the things they are comfortable with is Moda. Especially when it's time to transform a ho-hum wardrobe into something more fashionable.

"You can start by adding a thing here or there," Barone says. "I wouldn't jump from a loose, boot-cut jean to a skinny jean, but trim it up a little bit. Go with a little skinnier jean" than you're used to.

And while you're at it, extend your brand loyalty beyond your beloved Steelers jersey.

The first step might be to check out Moda's third floor -- arguably the store's most casual. Composed mostly of jeans from designers like Standard ($155) and True Religion ($280) and T-shirts from designers like Wornfree ($50) and Nudie Jeans ($98), the collections there have a younger, more widespread appeal.

"You'll never see suits and ties on the third floor," says Barone. But you will find a younger crowd: "The college kids go straight upstairs," he says.

The lower two floors are filled with collections from the world's highest-profile designers -- from Prada and Diesel to Rag & Bone and Paul Smith. But don't let the big names scare you.

"This store has a different vibe," says Barone, who has been doing business on Walnut Street for 20 years. "It's upscale without being pretentious."

Even so, he acknowledges, for newbies the selection "can be intimidating."

Most of the ground floor houses what Barone calls "dressy-casual" clothing. Barone's favorite collection, from designer Z Zegna, resides there. Composed largely of blazers and suit coats, the line is notable for its slim fit, as well as its fabric. Priced at $895, one blazer, faintly striped blue, gray and black, is crafted from angora and wool.

"[Z Zegna] is a little more classic, with a younger fit," Barone says. "It's slim without being tight."

The first floor also carries Moda's best-selling brand, Woolrich. The central Pennsylvania collection (a plaid flannel shirt sells for $145, and a crewneck sweater for $195) "is just right on this season," says Barone, noting its emphasis on plaid, which is especially popular right now. "Everybody relates to it."

Not everyone relates quite so well to the clothing on Moda's second floor, acknowledges Barone -- who refers to it as "the edgier floor." There you'll find "the most fashion-forward collection in the store," he says.

For example, Odyn Vovk's bat shaket -- which, Barone says, "is kind of a cape, kind of a scarf, kind of a cardigan" -- closely resembles a Batman cape. Yet, its popularity surprised even Moda's owner.

"We bought it because it was an image piece, but we sold it right away," says Barone. Women who purchased the item typically wrapped it around them like a shawl, he says, while the men who bought it typically wore it in a gothic, cape-like style. "You have to be very fashion-forward to wear that."

Not everything at Moda sells so well, but Barone is a risk-taker, too. And collections such as Odyn Vovk's are what set Moda apart from other stores, he says: "We're always going to show the latest fashion. Regardless of salability, that's what we do." 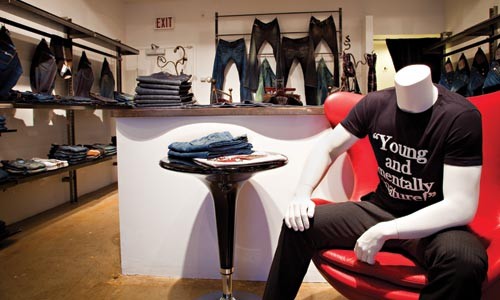