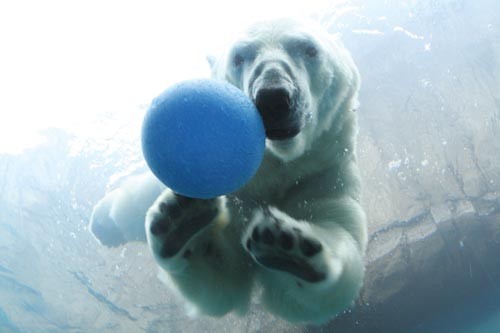 The polar bear is a big animal — and a big star. So it's no surprise that City Paper readers voted the polar bear their favorite animal at the Pittsburgh Zoo and PPG Aquarium. When voters cast their ballots, the zoo actually housed two polar bears — twin brothers Nuka and Koda. But Nuka left for Detroit in early November, leaving Koda the sole recipient of this year's accolades. We recently caught up with Koda, who like many other celebrities, chose to answer our questions through his handlers — in this case, zoo staffers Jennifer Funk and Paul Moylett.

You're obviously not a Pittsburgh native.

I was born at the Denver Zoo seven years ago. But I've been living here at the Water's Edge exhibit since 2006. I've got these rocks, a back room and the pool with the cool tunnel, where I can watch visitors.

It's not exactly the Arctic, though.

I've never been there. I was born at a zoo, like my parents. And the people here keep it the way I like it. The water is about 50 degrees, and the pool is cleaned once a week. I've got toys, like my pool noodle and ball. In the summer, I have an air-conditioned cage, if I want to use it. And when it snows in the winter, that's awesome — I can slide down the rocks!

In the wild, polar bears eat seals. Does it bother you to have the seal exhibit right next door?

Nope, I get a balanced diet here. About one-third is horsemeat; another third is fish, like herring and capelin; and the rest is a "chow" — like a fatty dog food, specially formulated for polar bears. Plus, I get the occasional treat, like a block of ice with chopped-up veggies in it. And you know, some polar bears that do live up north are having a tough time finding food; it's a bad situation.

What's a typical day for you?

Things are a little different since Nuka left. We used to take turns being on exhibit, hanging out together, or having some alone time. But nowadays, I mix it up — sometimes I'm outside, or in the back holding area doing some training with my handlers. We work on skills that help them take care of me, like holding my mouth open or doing an "up," so they can look at my body.

Does it ever bother you to have all those people staring at you?

I'm pretty used to it. My space is surrounded by windows, so I see people all the time. Umbrellas, though, those catch my eye — and sometimes when there are peacocks walking by, I notice those. But what really gets me going is seeing zoo employees wearing polar-bear costumes!

Previous: Best of 2011: People and Places
Comments (0)
Comments are closed.