Best of Pittsburgh — Legacy: Rick Sebak 2018 | City Paper readers have voted the Face of WQED a winner in five categories over the years | Legacy 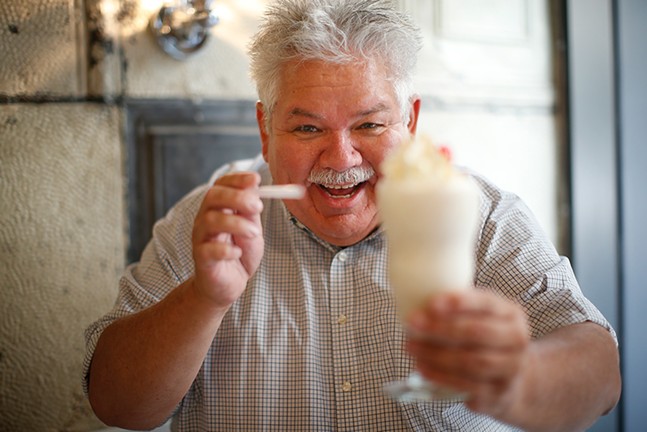 He says “it’s a hoot,” and Rick Sebak would know. The Face of WQED has won in five City Paper Best of PGH categories over the years, as readers have picked him for everything from “Best Media Personality” (twice) to “Best Local Celebrity to Take a Selfie With.”

That last one particularly pleases Sebak, who “lives by the Fred Rogers Rule” when it comes to being recognized in public: never say no to a photo.

Kind of perfect when you think about it. After all, Sebak is probably more associated with WQED than anybody other than the late Mister Rogers.

Sebak has been creating unforgettable programming at WQED for 31 years — only two fewer than the original run of “Mister Rogers’ Neighborhood.” But Sebak’s shows, described on WQED’s website as “wacky documentaries,” are not what always draw people into his space, whether he is at a chain bookstore or snacking at an eatery made famous by, say, “What Makes Pittsburgh Pittsburgh?”.

“Oddly, I’m reminded of being in (Washington) D.C., at a store in Georgetown, and somebody coming up and asking, ‘Are you Rick Sebak?’” he says. “My friend was, like, ‘Wow, I’m impressed.’

“For many years, if people recognized me around Pittsburgh it was because of pledge (drives). It’s still so rarely because of the shows.”

If this answer is surprising to readers, Sebak might find it fitting. His being surprised “still … is the best part of my job.”

In fact, Sebak was surprised he took what became a life-changing gig way back in 1987. A colleague pointed out an advertisement in a trade journals and urged Sebak to apply. Enjoying work in South Carolina, he was hesitant.

“I thought, ‘Do I want to go back already?’” Sebak says. Born and raised in Bethel Park, he had been away for 16 years before returning to the region and quickly thinking, “Wow, this is so cool.”

What makes home cool now is what did then. “We’re all surprised by this city that’s endlessly fascinating,” Sebak says. “We love this town, but we don’t know so much about it. I did a show on Route 88. In it, I drove to the end. I had never done that, and I grew up right off 88.”

The rides on which Sebak has taken us contribute to his legacy as a beloved Pittsburgh personality. Pittsburghers have had a hoot being shown the best of, well, almost everything.