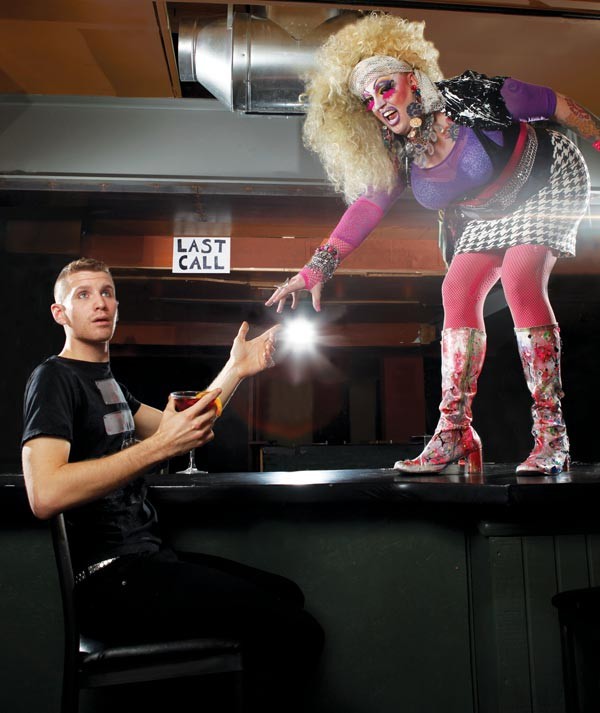 Photo by Heather Mull
(Drag) Queen of Heaven: When it's really time for Last Call, will you be touched by an angel?

Andy Warhol was famously not a huge fan of his hometown, but he probably would have liked hanging out at The Warhol. In addition to the museum's consistently thought-provoking exhibits — its retrospective of Debora Kass opens Oct. 27 — the Warhol hosts cult film screenings, innovative musicians and other mind-expanding events, making it a place to be seen ... and, more importantly, to see.

Intended to be a venue for any mix of local art or performances, the "gallery" tag may be too limiting for SPACE, which opened in 2004 in the spot of a former pornography store. Featuring five shows a year under its 17-foot high ceilings and within a strict budget, SPACE is guest curated and known for launching Pittsburgh artists.

The charm and importance of this small, but mighty company isn't that it merely presents top-notch stage performances, but that it brings new, compelling works from some of this country's great contemporary playwrights. Add to that its Young Playwrights educational program and the City Theatre's impact on the local cultural scene is a great one.

If there's one thing City Paper readers appreciate, it's a dance company that keeps them on their toes. Pittsburgh Ballet isn't just rehashing the classics: This year, it became the first U.S. dance company to perform choreographer John Neumeier's A Streetcar Named Desire, before touring Israel this summer. But don't worry, traditionalists: The Nutcracker will be back this December.

The bartenders that get all the press these days are the ones making cocktails that feature, like, tungsten. But in Pittsburgh, there'll always be a place for a guy like Mark Miller: a bartender with easy-going charm, an honest pour and a longstanding familiarity with a diverse cast of regulars. A quintessential neighborhood barkeep, in a quintessential neighborhood bar.

Salt's roster of hand-crafted cocktails may seem brief — there are fewer than 10 — but each has been so carefully created that there's no need for run-of-the-mill backups. The bartenders combine choice base spirits — Boyd & Blair vodka, Wigle White rye, a hand-picked Kentucky bourbon — with mix-ins both expected (fruit juice, cordials) and not (squash, apple butter, beet juice).

Opened this past spring, Exit provides a more accessible Top 40-plus companion to Static, our "Best Dance Club" winner. The two are technically attached and, when necessary, can be combined, like Voltron, into the biggest club in the area.

Blush exotic club features totally nude dancers, from talented amateurs to national acts. There's also a full bar, and lap dances are available. There's something going on at all hours of the day, from the free lunchtime buffet to happy hour and amateur nights.

In a Strip District space adjacent to Exit, Static offers up electronic music all the time: It's the big-room club for folks who are serious about their dance music. DJ Strobe is the club's resident and touring DJs stop by on the regular.

After the Upstage shut down in 2006, ending its popular '80s Night, several bars moved to fill the Regan-era dance-night gap. But Belvedere's has managed to make it something of an institution. Featuring DJ Hatesyou most weeks, this '80s Night is the place to be on Thursday nights, whether you're partying with friends, or eyeing up a new dance partner.

Versatility is key at Stage AE, which later this month will host Fiona Apple and Insane Clown Posse. Its ability to accommodate outdoor shows, indoor shows and smaller "club-sized" shows makes the venue an attractive stop for national acts, particularly those whose large draw would have, in the past, left them with limited Pittsburgh venue options.

With details like exposed brick walls and filament light bulbs, this Larryville watering hole takes its patrons back to this city's industrial past. But the ambiance is just part of the draw. There are 40 beers on tap including several craft brews; 60 whiskeys behind the bar; and a specialty cocktail list with offerings — like the Smokestack — that you won't find anywhere else in the city.

Three separate bars and an outdoor deck ... weekly bingo with drag queen Marsha "Monster" Mallow ... drink and appetizer specials during Steelers games ... This longtime LGBT establishment — a perennial readers' favorite — has so much to offer that it could actually turn people gay. But even if not, the staff is friendly and the vibe welcoming, and thus inevitably crowded on weekends.

Oakland is home to many an esteemed institution: the University of Pittsburgh, Carlow College, Carnegie Mellon University. And students of those institutions need to eat and drink. Cheaply. That's where Hemingway's Café comes in: good, cheap beer and drink specials; a massive list of draft beer; tasty and affordable pub grub that's half-off late nights; and weekly karaoke.

Grab the mike, belt out a boozy version of "Burning Down the House," and feel the love from the amped-up crowd. At Nico's, talent is secondary to enthusiasm. You could pick an introspective indie tune, but everybody at the bar wishes you'd go with "Hang On, Sloopy" or some deliciously craptastic Toto song. They want to sing, too.

Among bars where you can smoke, few are as iconic as this South Side joint. As Carson Street changes around it, Dee's remains the place for cheap drinks, two floors of pool and a companionably gruff rock 'n' roll vibe. The Surgeon General might not like the tobacco haze — but hell, at Dee's they'd probably buy her a drink, too.

Any place featuring specialty martinis — 30-plus of them, from Tiramisu to Jameson's Ginger — might well lure networkers. Add a location at Downtown's business and cultural epicenter; a sophisticated but welcoming atmosphere, complete with second-floor lounge; and a full menu with treats like spicy calamari, and you'd best slip a couple extra business cards in your wallet before visiting.

Actually, that's "Happy Hora," in the Spanglish spoken at this local chain's seven locations. But the deals here — half-off drafts, half-off regular wings, and $7 for a 22-ounce margarita — sound good in any language. Between 4:30 and 6:30 each afternoon, you're essentially getting a free second round of expertly curated microbrews like Brooklyn, Victory, East End and Dogfish Head. ¡Viva!

Bearded men. Girls in skinny jeans. Lots of dark sunglasses. Brillobox is hipster central for the city of Pittsburgh. A draw, as well, for musicians and artists, Brillobox's second-floor space allows for an eclectic mix of performances. The bar downstairs, in the meantime, provides plenty of cover for the wallflower taking it all in.

How could a place partly owned by, and named for, a local football legend not win our Best Sports Bar category? The Bettis Grille is located a short walk from Heinz Field and a shorter walk from PNC Park, and offers a comprehensive menu that stretches from a deep-fried cheeseburger to edamame.

A repeat winner, Olga Watkins rarely slows down; the blues singer is also a chef and a part-time food writer. Her band's real claim to fame — because it knows how to work a Pittsburgh audience — is "Drink Up Yinz Bitches," an annually updated Steelers theme. But beyond that, Watkins is a prima performer who surrounds herself with great musicians.

It's no surprise Wiz tops the hip-hop category this year; by far the most successful rapper to come out of the 412, he put down roots in the area earlier this year, buying a fancy manse in Washington County and proposing to his (now-expecting) girlfriend Amber Rose. His next album, O.N.I.F.C., is slated for release in December.

When you're reinventing a musical tradition, there's always a danger of coming across as, well, precious. But there's nothing like an accordion to cut through pretentiousness. And this four-piece puts its emphasis on high-octane, danceable fun. And that, no doubt, is why it's managed to establish its own tradition — winning City Paper readers polls — after forming only three years ago.

Outside of St. Patrick's Day or the occasional Irish Festival, you wouldn't think that a band playing Irish music would attract such a large following. But the Bastard Bearded Irishmen have become a 'Burgh favorite over the past 18 months. They play a combination of traditional Irish tunes and originals, mixing Irish flavor with a heavier, rock/punk sound that reflects its members' musical backgrounds.

Fist Fight in the Parking Lot

It's not hard to understand the appeal of Fist Fight in the Parking Lot. The four-piece, whose radio-ready rock falls somewhere between Pantera and Queens of the Stone Age, brings a heavy dose of fun to heavy music. Certified badass Abby Krizner fronts the band with a swaggering bravado that would make Phil Anselmo smile.

Next: Best Gallery for Local Artists