Thin or thick; skinny or fat; fried or boiled; hot or cold; wheat- or rice-based. Lu Lu's Noodles has -- yes, that's right -- all sorts of noodles.

A broad menu, low prices and speedy service have made Lu Lu's an institution for more than two decades, one that is popular with Oakland's students, faculty, museum-visitors and hospital staffers.

The menu instructs: "Eat Noodles. Dress Casually. Speak Freely. Think Quick." While these suggestions seem out of order, diners are cautioned to heed the last admonition. As befits an eatery with lots of regulars and a commitment to turning tables, waitstaff come for your order before a newbie can even make it through the menu's first page.

When confronted with so many options, I ask: "What would Dr. Freddie Fu do?" The renowned UPMC orthopedic surgeon would presumably order his namesake noodles, which the menu identifies as having been prepared "specially for him." The Fu plate consists of thin sauce-free noodles, very lightly stir-fried with green onions, bean sprouts and chicken. (I made the somewhat less-healthy choice of substituting sweet BBQ pork.) It was light, yet satisfying, with some secret ingredient creating a warm peppery aftertaste.

But man cannot live on noodles alone: A large portion of the menu is devoted to rice dishes, including a Hong Kong rice bowl and Hawaiian fried rice, a West Coast staple not often seen in these parts.

In fact, another of Lu Lu's menu suggestions should read: "Try This." Diners can mix it up, as most dishes offer a choice of protein -- from beef and chicken to the more adventurous Asian sausage, squid and fish balls. Non-meat eaters can choose tofu or vegetables.

Slurp down those noodles with one of dozens of varieties of bubble tea, all of which can be pumped up with tasty extras such as jelly or fruit. Exotic ice creams -- mango, green tea, red bean -- are also available ... at least until the lowly but versatile noodle makes the transition to dessert. 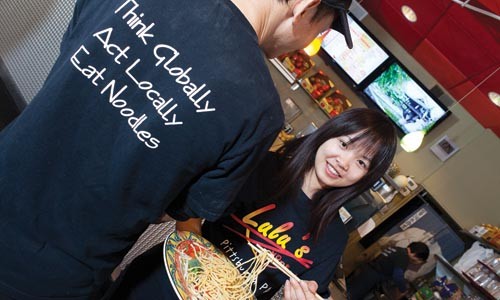