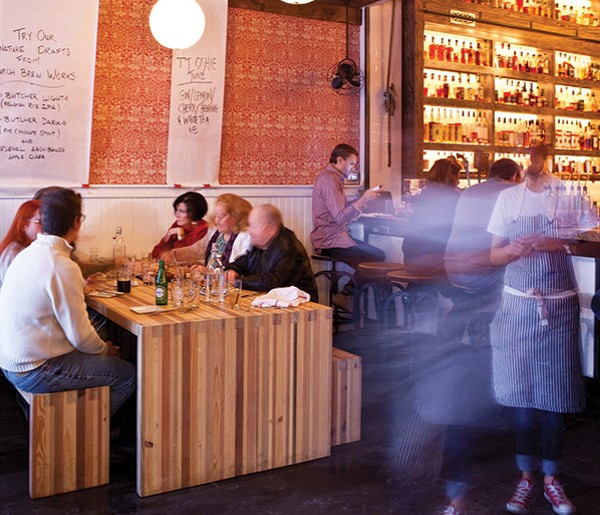 Photo by Heather Mull
Another night of food, booze and fun at Butcher and the Rye

Sitting along Sixth Street at a café table, Joseph Watson and his wife, Kristine, finish up a small plate of pork belly and cauliflower. As she describes textures and flavors, he takes a big swig from a tumbler with ice. When asked if there's bourbon in there, he simply looks up and says, "There won't be shortly."

This is Butcher and the Rye on a Saturday night in Downtown Pittsburgh — chosen by City Paper readers as the city's Best New Restaurant.

A walk inside reveals a towering, backlit bar featuring more than 350 bourbons, an American flag pinned to rustic paint-chipped walls, and décor that puts one in mind of grandpa's hunting lodge. All the while, sound waves of loud conversations and Lynyrd Skynyrd's "Tuesday's Gone" compete for attention with smells of juicy meats and mac-and-cheese.

"Some of the best times I've ever had were at hole-in-the-wall, BYOB-types of places with groups of friends," says Butcher owner and chef Richard DeShantz.

While Butcher and the Rye is certainly not BYOB (and who would want to when you have your choice of several aged-whiskey flights, signature cocktails and craft beer?), DeShantz's mission when he opened the place last year was to combine top-notch cuisine and a drink-driven menu with a relaxed atmosphere.

"I wanted to do something else after Meat and Potatoes," DeShantz explains, referring to the nearby gastropub he opened in 2011. "The whole idea for me is having a comfortable style, something not pretentious and really strongly about balance. I want people to get a new treat with every bite. When they're eating at Butcher, I want them to look up and see a local artist's work or a neat decoration."

At a round table under an antler chandelier and warm candlelight, the Katz family from Philadelphia sat with small plates emptied of what had been mac-and-cheese, pig candy, Caesar salad and marrow, and were eagerly awaiting their entrees — Wagyu flank steaks and ribs.

"Food, restaurants overall, are getting better," explained Melissa Katz, a former restaurant reviewer. The family was in town visiting their son, Tanner, who attends Pitt. "I think people care more about what they're eating and what's local."

Meanwhile, chef DeShantz is gearing up to open another concept restaurant next door to Butcher, called Tako, which will serve street foods from around the world.

"I've been a chef for years. Even when I opened Nine on Nine, everything was different here. People were different. But everything is growing," he says. "I mean, look at Downtown tonight. People are out now. It's a great time to be a chef."