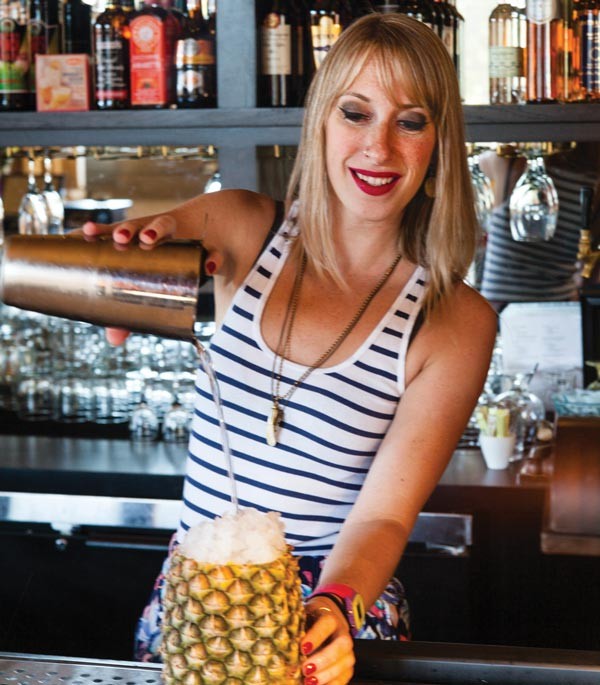 "While we don't have Captain Morgan," says general manager Jason Carr, "our bartenders will work with you to get something you'll like. Tell them you like a particular spirit or flavor profile, and they'll tailor a drink specific to your preferences, or assist you in choosing one off our cocktail menu. They're here to guide you."

The bar, opened last spring by Verde owner Jeff Catalina, focuses loosely on pre-Prohibition-style cocktails. That approach fits with the ambience of the space, the old Arsenal Bank, which was open from the late 19th century through the mid-20th. Some of the old bank details (the safe, the vault security system) are preserved, and elements of the decor — like the old checks, found in the building, that are decoupaged on the wall — keep the theme alive.

Still, you don't walk into a period piece when you enter Tender: Carr says the staff strives to strike a balance between a romantic vision of 1920s life and a practical, contemporary venue. On weekends, you'll find staff dressed up pretty fancy, and touches like old seltzer bottles from Pittsburgh Seltzer Works add to the classy, old-time feel. On a recent Monday night, by contrast, bartenders were sporting flannel shirts, and Neil Young was on the turntable. (Tuesday nights, you'll find a local musician on the piano, playing jazz.)

Tender bartenders aren't just people off the street who can pull a draft. Carr — who worked at Verde, and previously at the now-defunct Firehouse Lounge and Embury in the Strip — began assembling the Tender crew months before it opened, and worked with them to come up with an initial cocktail menu. Featured cocktails come with a note from the bartender who crafted them, and are signed with the author's initials. (While pre-Prohibition is a starting point, new cocktails, using non-era-specific spirits, are welcome.) When Carr talks about the group, he sounds like the coach of a sports team, evaluating the roles played by each member of the roster: the tiki-drink guy, the craft-beer woman, the sommelier, the beverage director who knows his obscure spirits.

The cocktail list changes regularly. Some standbys get extended play, like the Van Buren, a patron favorite that features Wigle Ginever, chartreuse, Benedictine and a few other additions. Most other cocktails come and go in favor of something new that one of the bartenders has come up with.

Ultimately, the point is to provide an experience that will be different from other bars, even within the growing local cocktail scene. The folks at Tender also hope you'll learn a thing or two.

"Our goal is to provide our guests with a comfortable and educational experience," says Carr. "And maybe even get them to try something outside of their comfort zone."