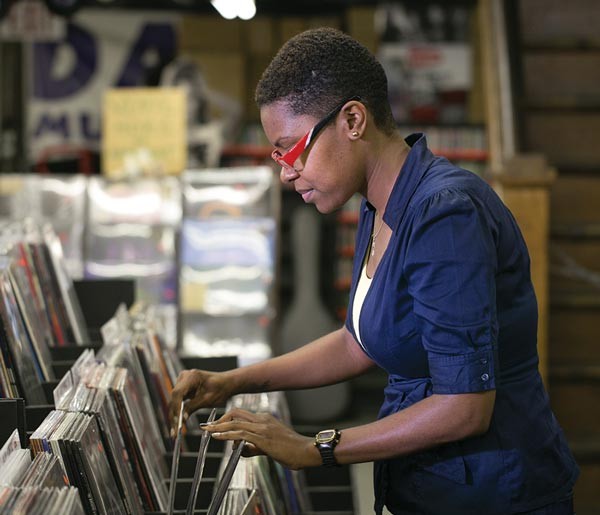 At Dave's Music Mine, most of the records are still used, but there's something new happening, too: vinyl.

Yep, the LP format, left for dead 20 years ago, is back. Sales of new vinyl, though still just a percent or two of all U.S. music sales, have doubled in the past few years. Vinyl incarnations of major new releases complement re-issued classics. And Music Mine owner and founder Dave Panasiuk is staying on top of it all.

The "key to why we're still around," he says, "[is] constantly trying to change with the times."

In fact, Panasiuk recently added a whole new rack for all the fresh vinyl, from vintage Stax to new Nine Inch Nails. Vinyl is actually outselling the CDs and DVDs at his South Side store — the last of four locations that Panasiuk once ran in the region. The others, he says, were done in by downloads and Wal-Mart.

The selection here is mostly rock, but with ample jazz, blues, folk and soul sections. "It seems incredibly meticulous," says twentysomething Julie Cronan, a first-time customer. "It seems almost like a personal collection, which is cool. It's like a museum of music."

If half of Panasiuk's in-store customer base is people over 50 who never took to downloading, the other half is young folks looking for something "new." That includes Mark Schneider, who on a recent first visit to Dave's bought a reissue of De La Soul's Three Feet High and Rising. Schneider and his girlfriend now enjoy it on his newly-purchased reconditioned turntable.

"It sits in the living room and we listen to it every day," says Schneider, of Brookline. "I really have appreciated the purer sound that comes from the [vinyl] record."

Other Dave's customers, meanwhile, are sticking with plain old CDs. "I'm a technophobe," says Fred Orlansky, who's grabbed some live Warren Zevon and Dire Straits and a Lawrence of Arabia DVD. "This is the last format I'm gonna do."

But even with those regulars, and despite the sales boost from vinyl, Panusiak makes two-thirds of his sales online — mostly with pricey, out-of-print CD rarities. So why bother with bricks-and-mortar at all?

"I couldn't stand being in front of a computer all day," says Panasiuk, who still lives in Oakland, where he grew up. "I want to interact with customers" — not least so he can proselytize about the glory of vinyl. After all, he says, "It's the only medium right now that's going to increase in value if you sit on it."