Best local sports moment of the past year 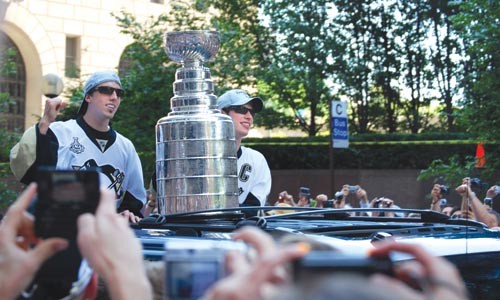 Being a Pittsburgh Penguins fan on Valentine's Day 2009 was no box of chocolates. The team was 27-25 and on the verge of missing the Stanley Cup playoffs after losing in the finals the year before.

But on Feb.15, the Pens announced that they were firing coach Michel Therrien and replacing him with little-known, first-year minor-league skipper Dan Bylsma. Bylsma was named interim coach and promptly lost his debut game. The flat performance prompted Pittsburgh Post-Gazette scribe Ron Cook to opine:

"The Penguins appeared to get nothing from Bylsma's hiring."

But the concern of Cook and the rest of Pens Nation was misdirected. Over the next 25 games, Bylsma's Pens would rack up an 18-3-4 record ... earning not just a playoff berth, but the fourth seed and a home-ice advantage in the first round against the Philadelphia Flyers. It was the start of an historic run that would lead the Pens to a Stanley Cup championship over the Detroit Red Wings ... whom they'd lost to in the finals the year before.

It's tough to choose a top sports moment when your city wins two pro championships in a single year. But for shaking off their early-season hopelessness to win it all, the Pens have earned another honor: the distinction of having been chosen by City Paper readers as the Best Sports Moment of 2009.

And it was one very long moment. Even if you just start with the playoff run.

In the first playoff match-up, the Pens beat their nemesis, the Philadelphia Flyers, four games to two. In the series' final game, the Pens quickly fell behind the Flyers 3-0. But in the second period, Penguin Max Talbot got into a fight with Philly bruiser Dan Carcillo and something happened.

Soon after, Ruslan Fedotenko scored the Pens' first goal of the night. His teammates followed with four more, including two from captain Sidney Crosby. With victory assured, the Pens moved on to the second-seeded Washington Capitals. It would take the Pens the full seven games to dispatch the Caps in a series that featured three overtime wins.

After the struggle with Washington, the conference finals were almost anti-climactic, with the Pens annihilating the Carolina Hurricanes four games to none ... and setting up a repeat of the 2008 Stanley Cup Finals matchup.

That series started badly for the Pens. Detroit welcomed Pittsburgh to Joe Louis Arena by trouncing them 3-1 in each of the first two games. The rap on the Pens was that they couldn't win in Detroit ... but the reverse held true for the Red Wings when they came to Pittsburgh. The Penguins notched a pair of 4-2 wins at home, tying the series.

The two teams took a game apiece ... and the series returned to Detroit.

On June 12, 2009, the Red Wings and Pens squared off in Game 7. The Penguins used up all of their offense in the second period, when Max Talbot scored two goals to give them a 2-0 lead. Victory now rested solely on the glove and stick of goalie Marc-Andre Fleury.

Fleury was perfect until just over six minutes left in regulation, when Jonathon Ericsson scored to pull the Red Wings within one. With seconds remaining, Fleury blocked a shot that fell right in front of Detroit's Nicklas Lidstrom, who had one chance to send the game into overtime.

What happened next distilled the desperation and grit of the Pens' entire season into a single instant.

Wrote Dave Stubbs for Canada's National Post: "Fleury dug his left skate into his crease and threw himself horizontally, almost violently across the ice, where Lidstrom's shot perished in his thickly padded chest. It was the stop that saved the Stanley Cup for the Penguins, and Fleury will relive it in his dreams."

As will we all.