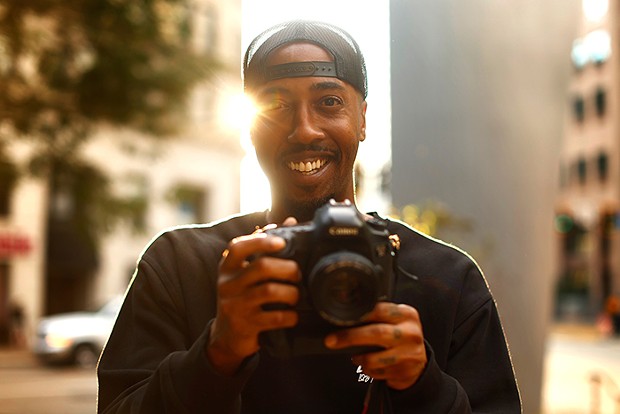 Since 2016, there hasn’t been a year that’s gone by where Chancelor Humphrey's name hasn’t made an appearance on Pittsburgh City Paper’s Best of Pittsburgh list.

His crisp and bright photos of Pittsburghers Pittsburghing around Pittsburgh showcase a stylish side of the city that those from outside the area might not expect to see in a former steel mill town. Instead of a sea of camo and work boots, the influence of Pittsburgh’s industrious past shows itself in a unique way, one that Humphrey expertly captures with his camera.

“We're known for blue-collar, hard work, and I think that really comes through in the street style here,” he said in a 2016 interview with City Paper. “There's definitely an attitude with our style.”

And Humphrey himself is no exception. In between his photographs featuring a wide variety of people and fashions, the photographer includes selfies of himself posing in everything from bright pink swimming goggles to a black denim ensemble, topped with a Pittsburgh Pirates hat.

Beyond Instagram, others might know Humphrey as a former on-air radio host at 100.7 Star and WAMO, or as one-half of the duo behind Creatives Drink, the free, local networking event that aims to connect Pittsburgh residents and businesses through alcohol and fun in eccentric locations.

Whatever the case, it’s clear Humphrey, who was a 2021 Pittsburgh Magazine 40 Under 40 honoree, is definitely helping keep Pittsburgh dope.

“I want to leave a legacy, an imprint,” Humphrey told Pittsburgh Magazine last year. “I want to be the Black dude from Pittsburgh who is bigger than Mr. Rogers.”

May Humphrey, 2022’s Best Lifestyle Influencer, continue to influence both Pittsburgh residents, and Pittsburgh perception, on (and off) the internet for years to come.