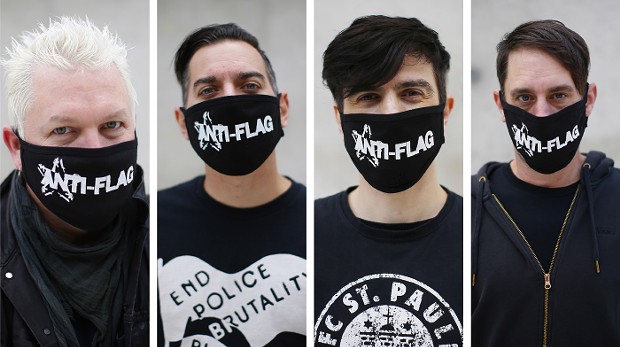 CP Photos: Jared Wickerham
Pat Thetic, Chris #2, Justin Sane, and Chis Head of Anti-Flag
When he heard the term "legacy band," the first thing that popped into Anti-Flag vocalist and guitarist Justin Sane’s head was all of the “bad-ass classic rock bands” that he grew up listening to on WDVE.

“Like Boston and Kiss! So I was into it,” says Sane of Anti-Flag’s first-place Best Legacy Band win in Pittsburgh City Paper’s annual Best of Pittsburgh readers’ poll. “That said, in this case, I interpreted the meaning of legacy to mean you left a lasting mark on people or … you just got old. Hah! It definitely speaks to longevity, which we have certainly had.”

Longevity is one word for it. Since the punk rock band’s formation in 1993, Anti-Flag has been spreading its message of activism, human rights, and anti-war in Pittsburgh and around the world. This is partly thanks to its own international touring, but also to A-F Records, the record label the members of the band founded in 1997 as a platform to spread the music of other socially conscious and politically active punk bands.

Eventually, Anti-Flag took that mission even further with the creation of ANTIfest in the U.K., a socially conscious punk rock festival that made its way to the band’s hometown of Pittsburgh in 2017 for the event's fourth iteration. It coincided with A-F Records 20th anniversary.

But while Anti-Flag — made up of Sane, Chris #2 (bass guitar), Chris Head (bass guitar), and Pat Thetic (drums) — has spent the past 27 years traveling the world spreading political activism through its music, this win is extra special for the band members because they all still live in Pittsburgh.

“It has always been a tradition at Anti-Flag shows to announce from stage, ‘We are Anti-Flag from Pittsburgh, Pennsylvania!’ in a way you’d expect the ring announcer at a wrestling match to say it,” says Sane. “It kind of started as a shtick but over the years it became a celebration of the fact that this city made us who we are, and we want everyone to know it exists and it is special.

"We’ve literally made that proclamation all over the planet: Hong Kong, Moscow, Berlin, London, Tokyo, Sydney, Jakarta, you name it! So to be recognized by our city means a lot to me. The fact that people are aware that we exist in the place we love the most, that is incredibly special to me.”