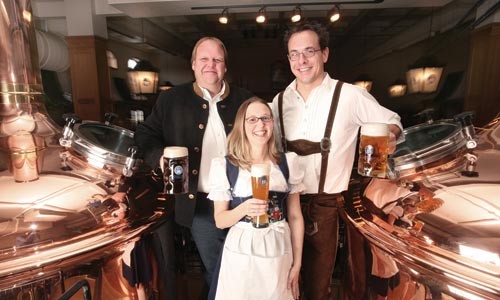 Even in early December, it feels like Oktoberfest at the Hofbräuhaus, Pittsburgh's newly constructed beer hall in the SouthSide Works. And that's just what the proprietors are going for.

"It's much livelier here than even Oktoberfest in Munich," says Hofbräuhaus brewmaster Eckhard Kurbjuhn, who came from the Bavarian capital city to oversee the specialized brewing of the Hofbräuhaus beers. "They love having us here."

So, it seems, do City Paper readers, who picked the 'Haus as the city's best German restaurant ... and also gave it runner-up honors for best new restaurant.

It's possible to have a quiet meal here, if you insist. On one side of this sprawling building is a closed-off dining room where one can enjoy bratwurst and schnitzel in a subdued, comfortable atmosphere. But it's the beer hall that attracts the crowds.

The hall is a raucous joint with high ceilings and rows of wooden tables and seats lined end to end. The tables fill the space between the hall's large wooden bar and a sizable stage, where there is live music nightly.

On a recent Wednesday-evening after-work stop, a good-sized crowd had gathered already, as an accordion player churned out German tunes. Every so often he would call his audience together for a loud, joyous toast. Some patrons stood on their seats -- obviously regulars -- but everyone lifted their large glasses for the celebration.

Munich's original Hofbräuhaus opened in 1589 when Wilhelm V, the Duke of Bavaria, basically decided that local beer sucked. He hired a master brewer, and few complaints have been heard about German beer since.

Flash forward 420 years to last March, when Pittsburgh became the third American city to host a Hofbräuhaus of its own. While the U.S. locations aren't exact replicas of the original, general manager Tom Williams says each is similar in overall design and approach.

Under Kurbjuhn's watchful eye, beer production is done on site, in full view of the customers. The process begins in two large copper containers towering high above the bar. The Hofbräuhaus always has regular varieties on tap as well as a monthly seasonal beer.

And because there weren't quite enough reasons to celebrate already, the first Wednesday of every month is marked by a ceremonial "tapping of the keg." The beer is brought through the restaurant like the grand marshal in a parade. The procession is led by a man playing a baritone horn; several employees and patrons follow behind carrying flags and clinking large beer mugs.

This month's brew, Christmasbier, was well worth the fuss. An amber lager, it's strong with just a slight hint of fruitiness. I'm not sure if it counts as a "German beer," since it was brewed here ... but either way, it's one of the best beers you'll find in town.

If the beer is the main reason to come to the Hofbräuhaus, the food is a close second. There are American favorites for the less adventurous, but the German food is the star. I sampled a wurst platter featuring three varieties of the yummy little sausages: bierwurst, bratwurst and an all-beef mettwurst. All were good, but the softly seasoned brat was the best. The bed of mashed potatoes and sauerkraut was outstanding as well.

Also of note was the appetizer platter featuring Bavarian pretzels with a silky-smooth, full-flavored bier cheese. But the best dish was the least familiar: little, lightly breaded, golden-brown balls of sauerkraut and corn beef. The flavor popped on the first bite, and I was sorry when I reached the last.