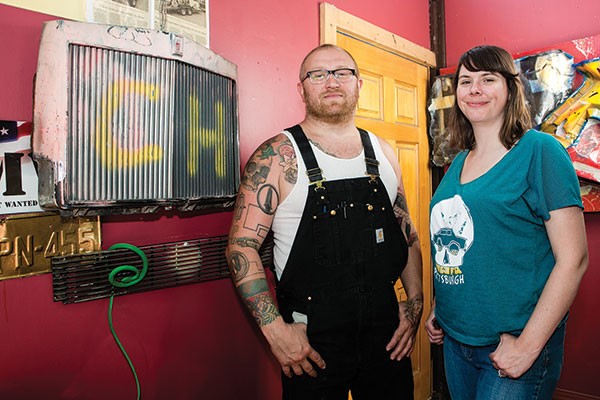 Photo by John Colombo
Art about town: Most Wanted's Jason and Nina Sauer

The Mercer County native served six years in the Army, studied art in college and taught trade skills at a school for court-adjudicated youths; unlike most art-gallery owners, he also wrecks cars in demolition derbies. He launched Most Wanted in 2007. With its brightly colored, frequently repainted façade and rustic-looking wood flooring, the storefront gallery and performance space in Garfield quickly became a hot spot.

Even on a Penn Avenue corridor that specializes in local talent, Most Wanted stands out, both during the monthly Unblurred gallery crawls and throughout the year. A big reason is Jason Sauer's commitment to building community. That mission only starts with the fact that of the couple hundred artists he's exhibited in the gallery's monthly shows, 90 percent have been local, he estimates. Another calling card is the gallery's annual open-call show, for which he hangs works from any artist, salon-style.

Most Wanted also: runs a basement gallery for up-and-coming talent; helps stage an annual street festival built around art cars; and organizes ad hoc shows at restaurants, theaters and other venues, some to support causes like the Healthy Artists health-care initiative. "They've really stuck with it and they're very supportive of local artists," says Juliana Morris, executive director of the Associated Artists of Pittsburgh, which has held shows at Most Wanted. "It's always a fun show there."

The gallery also regularly hosts literary readings and CD-release parties. Sauer, who has a graduate degree in printmaking, even annually exhibits his own work — mixed-media paintings that incorporate scraps from his demo-derby wrecks, as well as more traditional landscapes and nudes. And in April, Most Wanted opened a spin-off gallery in The Waterfront shopping district, in West Homestead.

Though he's lived elsewhere and has traveled extensively in the U.S., Sauer says he prefers Pittsburgh because its art community is not driven by money or sales. "It's driven by personal desire, and I like that a lot," he says.

Jason and Nina Sauer live over the gallery with their son, Rowdy Floyd, 2; together they run both the gallery and a contracting business that Jason Sauer says funds the arts side of things. Even that enterprise has a community-building component: Through a program operated with Goodwill of Southwestern Pennsylvania, Most Wanted General Contracting is staffed by young, recently released convicts whom Jason Sauer trains in trade skills while renovating local homes.

It's the gallery, however, that is his passion. "Every time I get to do Most Wanted stuff, that's my life," he says. "We try to include everybody."