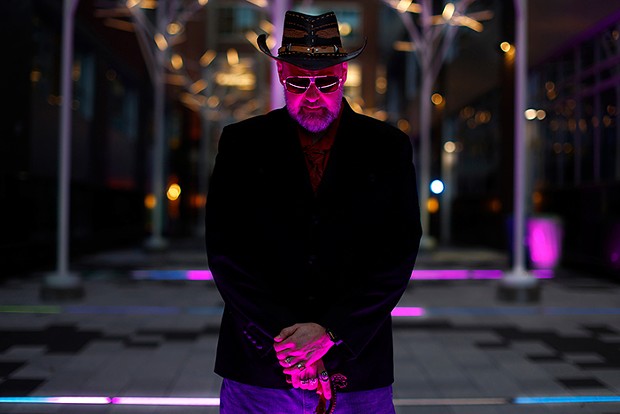 When asked what makes Venus in Furs stand out from other electronic groups in Pittsburgh, the duo’s founder and frontman Michael T. Nolan answers humbly: “Nothing. We are all great and work hard.”

However, there must be something that makes the rock-infused band distinctive because readers choose Venus in Furs as 2022’s Best Electronic Artist/Group.

“It was quite a bit of a surprise,” says Nolan. “I’m glad someone is listening.”

During the early 1990s, while Nolan was still in college, he and his friend Michael Routh thought it would be a good idea to try their hand at electronic music. So, Nolan bought a drum machine, sampler, and a Casio CZ101 keyboard, and Venus in Furs was born. Once the duo started booking gigs, John Routh, Michael Routh’s brother, took over for live shows.

Nolan describes Venus in Furs’ sound as “dance music with guitars” and points to the group’s top Spotify track — their namesake “Venus in Furs” — to get a feel for their dark, glitchy energy. But it may be better to catch a Venus in Furs’ live show. According to the duo, their unique performances are a “next-level experience when the lights go up and the dancing girls go-go on.”

Yes, you read that correctly. Venus in Furs hires dancers, often scantily clad in leather and lace, to take their live sets to the next level. An example of this can be seen in the music video for the group’s cover of “Relax,” the original controversial hit by Liverpool legends Frankie Goes to Hollywood. Their version highlights vocals from Alicia Lynn and powerful guitar solos from featured player Jason Sichi, as well as the work of Suz Pisano, one of this year’s top three winners in the Best Fashion Designer category, who zhuzhed up the go-go dancers in an exciting nod to prominent disco fashion designer Roy Halston.

But Nolan recommends Pittsburghers take in everything the Steel City’s electronic music scene has to offer.

“There is quite a lot of great local music out there,” he says. “People are creating all around you. Don’t be afraid to listen to it.”