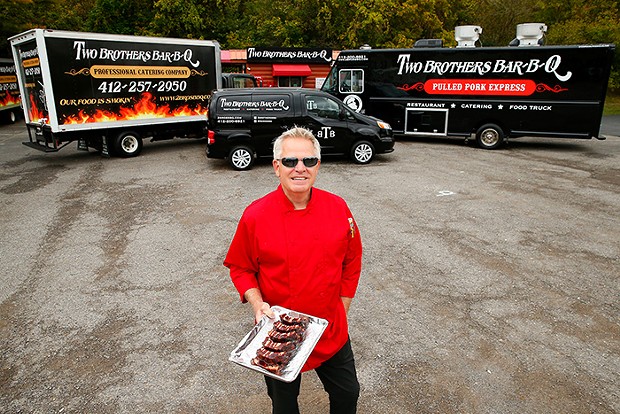 Clearly, this year’s winner of Best BBQ is on to something.

Mackovich, who runs Two Brothers Bar-B-Q with his wife, Terri, began smoking meat in 2005 with no prior food industry experience. He drew up a business plan in 2004 and went for it, not to make money, he says, “but to do it.”

In the last 15 years, the barbecue joint has grown into three pieces: a food truck, catering, and a takeout location. When all branches are in full swing, Mackovich and his team operate three massive rotisserie smokers (Mackovich smokes with hickory), which can each hold up to 72 pork shoulders.

The pitmaster won’t commit his food to a specific style of barbecue, saying that he’s taken pieces of the different variations, along with what he believes Western Pa. palates will like, into account to build his menu. Diners can find traditional eats — pulled pork, chicken, ribs, mac and cheese, coleslaw, and more — on his bill of dishes, but there are plenty of twists and turns as well. Mackovich’s rotating menu has fusions like pulled pork nachos and egg rolls, a pork quesadilla, a smoked chicken banh mi, and a fun mashup of beignets and PB&J.

But even with these unconventional plates, Mackovich is insistent that if it’s on his menu, it has a touch of his barbecue. If he’s adding a BLT to the list, the bacon will be smoked. Smoked brisket fills his cheesesteak, and eggs benedict on the brunch menu features corned beef, smoked.

Mackovich says being a pitmaster is an art form, and it’s obvious that he’s mastered the trade. After 15 years, his seasoning, smoke, and sauce triple threat is keeping the city coming back for more.