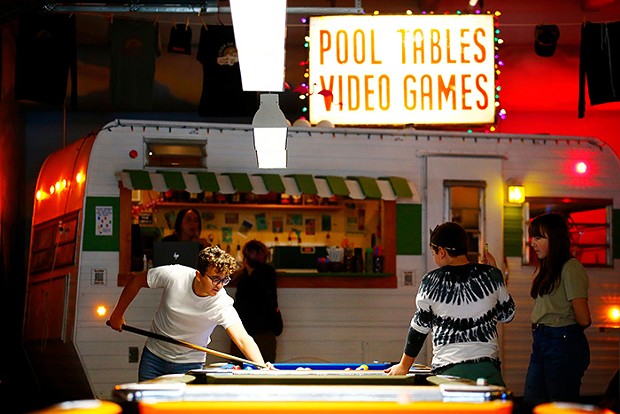 CP Photo: Jared Wickerham
Jack, Jonah, and Maggie Paice play pool at Coop de Ville in the Strip District.
Coop de Ville became a popular place as soon as it opened, with the combination Southern restaurant, cafe, bar, and arcade seeing constant lines out its doors on any given weekend. Sometimes the lines even stretch down the block and across the street.

Once inside the Strip District joint, customers can enjoy a wide variety of activities, drinks, and food. In addition to Southern-style fried chicken, an extensive craft beer list, and an inventive coffee bar, Coop de Ville includes fun activities like duckpin bowling, more than 30 classic arcade games, pinball, pool, and console games for Xbox and Nintendo. Coop de Ville’s atmosphere provides plenty of seating and a lounge for people to play their games alone or with friends.

It’s no wonder why readers chose Coop de Ville as this year’s Best Bar to Play Games, along with a number of other wins, including Best New Bar and Best Place to Celebrate Being Vaccinated.

Before the building was designed for Coop de Ville, the previous space was home to Marty’s Market’s grocery store, so the venue had a lot of room to work with. The dining room is the center point of Coop de Ville and is surrounded by picnic tables and cozy cafe seating.

It’s easy to chat with friends over a local craft beer at the bar (Coop de Ville has several on tap) and then head over to play over 35 classic arcade games like Asteroids or Donkey Kong or even shoot some pool. A dinner of fried chicken, creative sandwiches, or healthy bowls is then ready at the picnic tables, booths, or the outdoor sidewalk cafe.

Coop de Ville’s variety, whether that’s food, drinks, or a rousing game of bubble hockey, clearly has struck Pittsburghers in all the right places, and it keeps them coming back for more.
Coop de Ville. 2305 Smallman St., Strip District. coopdevillepgh.com