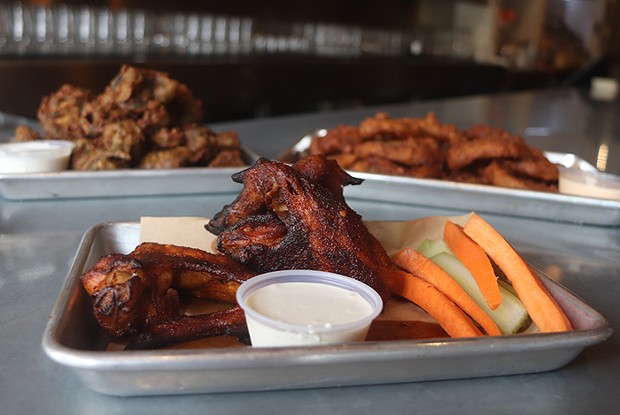 Kelsey Benigni, bar manager at Fat Head’s Saloon, has a lot of fun at her workplace.

“When I’m not working, I love to hang out here, or my friends like to come and hang out and get nachos or something while I’m working,” Benigni says. “It’s fun. Food and drink is just a fun way to socialize, I think.”

While many know Fat Head’s Saloon for its large sandwiches and brewed beers, folks also love its bar snacks such as its wings, nachos, and flatbreads.

Fat Head’s Saloon, located in the South Side, has been around since 1992. In addition to wings, which can be ordered house-smoked or fried with sauces like smoky BBQ, garlic parm, and “Black and Yellow,” the bar has an extensive “Munchies'' menu category. Options include a giant pretzel, Buffalo cauliflower, fish and chips, chicken tenders, the “Frickles” fried pickles, flatbreads in Chicken Choke Dip and Buffalo Chicken varieties, pierogis prepared either sautéed or deep-fried, the spicy “Arrogant Onion Rings,” and more.

While the sandwiches and “headwiches” remain incredibly popular, according to Benigni, many customers start the night out with some munchies.

“A lot of times, our guests will come to the bar, grab a drink, and start with wings or munchies before diving into the rest of the menu,” she says.

Benigni became the bar manager last summer after rising through the ranks over seven years. In that time, she’s gotten to know repeat customers.

“We have a lot of regular customers that like to come in, so it’s always fun to see them coming in and having an opportunity to enjoy themselves and hang out with their friends and get something good to eat too,” Benigni says.

She loves the munchies herself and has a top choice.

“My favorite would probably be the three cheese corn dip,” Benigni says. “It’s just really good. It’s a great one for if you’re just hanging out and having a couple drinks and you don’t want a whole sandwich or anything, but you just want something to munch on.”