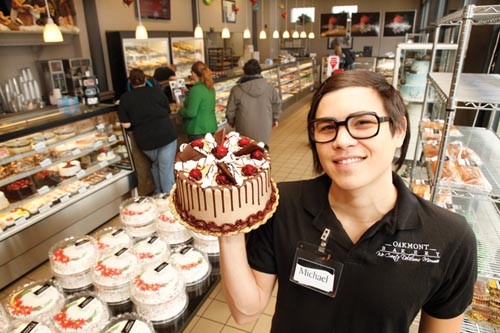 Photo by Heather Mull
A cake of one's own: Manager Michael Weaver shows off the bakery's signature cake, the "Oakmonter."

By all accounts, it has done just that. Oakmont Bakery won 2010 "Retail Bakery of the Year" in Modern Baking magazine, and Serrao says he often closes the shop with a line out the door.

"I hear so many people say, ‘When my family comes in, one stop is the Oakmont Bakery.' I love that," he says.

Serrao has been in the baking industry since he was 16 years old, having started out as a cleaning boy in a local donut shop. Later, he worked in bakeries at Giant Eagle and Foodland.  But all along, he envisioned opening a bakery of his own.

"I always had a vision of a mile-long bakery — when you walk in, it's stunning because there's so much stuff lined up," says Serrao. And indeed, Oakmont Bakery is expansive: There are glass cases showcasing hundreds of cakes, breads, cupcakes, cookies, donuts, pastries and more. There's a whole case dedicated entirely to things dipped in chocolate. There's also a café area where diners can have soups, sandwiches and salads.

Most bakeries, Serrao says, operate under the principle of selling out everything made each morning by the end of the day. But after noticing customers stopped coming as the shelves emptied, Serrao decided that Oakmont would keep baking all day long. And it bakes almost anything you can think of: cookies from biscotti, red velvet and thumbprints; cupcakes ranging from the Parrothead (with key-lime filling) to the Elvis in Oakmont cupcake (think banana mousse, peanut-butter frosting and white chocolate ganache). But the most popular item, Serrao says, is the Oakmonter cake, which features layers of cheesecake, fudge icing and dark-chocolate cake, covered in milk-chocolate frosting.

At the end of the night, any leftovers go to various nonprofits and community organizations.

Oakmont is a family-run business: Four of Serrao's sisters work at the bakery; his son, Tony, runs the production facility; his daughter Stephanie runs the retail building. And many recipes come from family members, rather than traditional commercial-baking recipes. His pumpkin-pie recipe, for example, is the same one his grandmother used. "At Thanksgiving, she'd taste the pie to see if it measured up to hers, and she'd always say something like, ‘You need a pinch of salt.'"

Which may explain why, to this day, Serrao's philosophy is "continuous improvement."

"Every year we work on something whether it's remodeling the café area of the bakery or upgrading our machines," Serrao says. "We're never there. We'll always be working to improve."

Previous: Best of 2011: Food and Drink
Next: Best Burger