I don’t have to worry about eating Brussels sprouts AND refried beans in the same night. 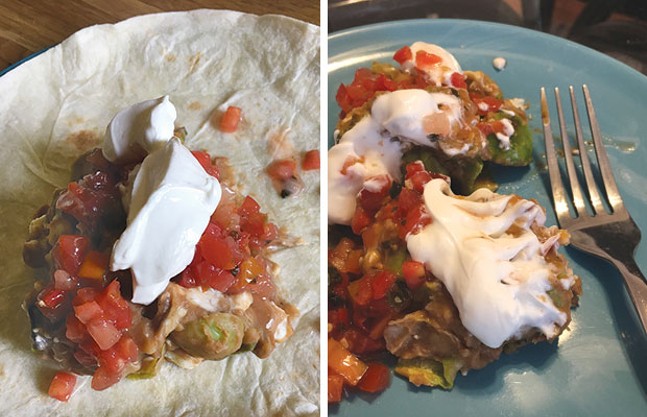 I don’t know that I should recommend this recipe, but I eat this about three times a week because it’s fast and filling and I rarely go out after 6 p.m., so I don’t have to worry about eating Brussels sprouts AND refried beans in the same night. Fall is here, and every introvert is already hermiting after a million summer social obligations. While not unhealthy, this is the kind of burrito that I shouldn’t even admit to eating. I feel as sad about it as I do seeing the amount of money withheld from my paycheck for a retirement plan, when — who knows — the world could end in 20 years or days or minutes.

Preheat oven to 425 degrees. Chop sprouts and drizzle with oil. I like to season them lightly with cayenne pepper because it’s one of a few seasonings I own. Roast the sprouts for 15-20 minutes. Heat ⅓ of a can of refried beans in a pan with a dash of water. Stir frequently for 3-5 minutes and sprinkle in the cheese. Add roasted Brussels sprouts to the pan and remove from heat. Sometimes I’m too lazy to microwave my tortilla for 15 seconds, but it really is worth the effort. Pile up the sprout-bean concoction, keeping in mind that the portion size will directly influence how many times you have to turn on your electric wax-warmer in your office the next day to eliminate any and all suspicious smells. Add some salsa and a spoonful of yogurt. Some days, I don’t even put this into a burrito shell. I just eat a pile of basic taco fillings off a plate. I’d say enjoy — but this is clearly a recipe for those who don’t like cooking, but kind of sort of care about what they put in their bodies. But also for those who give zero shits about what it tastes like.

Kelly Andrews is a poet who plans to stick around Pittsburgh indefinitely. You can find more sad, healthy (and funny) meals on her blog sadhealthymeals.wordpress.com

The Lawrenceville Farmers Market extends its season through mid-December