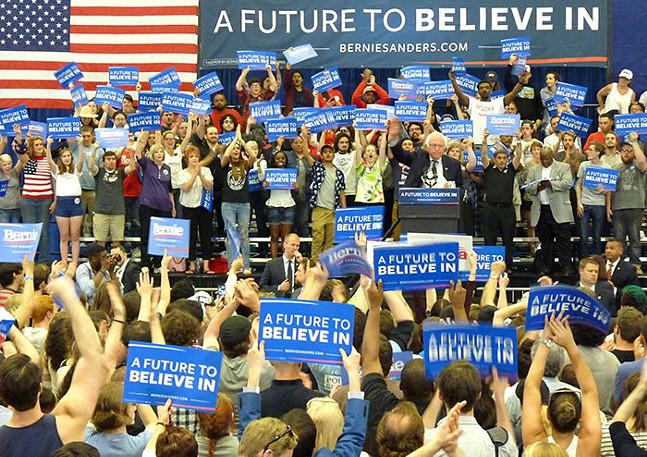 CP Photo: Ryan Deto
Sen. Bernie Sanders at a rally during his 2016 presidential campaign
On Wed., April 8, Senator Bernie Sanders (I-Vermont) suspended his presidential campaign, leaving Vice President Joe Biden as the only remaining Democratic candidate. While Sanders has suspended campaigning and fundraising, he will remain on the ballot in the upcoming primary states, including Pennsylvania's election, which has been moved to June 2.

Sanders, a democratic socialist, helped push the issues of the Democratic party to the left while building support among younger and working-class voters. In Pennsylvania, he gained support from state representatives who shared his policies of Medicare for All, a Green New Deal, raising the minimum wage, and other platforms that sought to broaden social safety nets and protect working people.

The statement emphasizes the significance of Sanders' campaign slogan "Not Me. Us." calling it an "an urgent call for solidarity and action."

"Each of us endorsed Senator Sanders from our own independent places. We are women who challenge politics as usual. We are dedicated to centering the needs, lives and dreams of working people," reads the statement. "Together, we share Senator Sanders’ platform of racial and economic justice; of fundamental human rights rooted in healthcare, housing, immigrant and civil rights, freedom from debt, true criminal justice reform; and a devotion to a hopeful vision of a future that calls for climate justice and a Green New Deal to transform our economy and save our planet."

Sanders received an endorsement from local progressive Democrats and newcomer candidates, like congressional candidate Jerry Dickinson, but other politicians who had previously shown support for Sanders did not offer an endorsement, like Lt. Gov. John Fetterman, a prominent supporter of the senator's 2016 campaign.

In both the 2016 and 2020 elections, Sanders had strong support from the Democratic Socialists of America (DSA), including the Pittsburgh Chapter. At the news of his campaign suspension, the Pittsburgh DSA echoed sentiments of the Pennsylvania public officials.

"We're sad but grateful to Bernie and every single person who helped build a powerful campaign that brought millions into this fight for a better world in a way that makes it far more possible for the working class to build an economic and political system built for and run by the many not the few," said the Pittsburgh DSA in a statement. "Bernie always said it was about all of us, not him. This is a moment to join the political revolution, not to let it end with one person's campaign."

In the joint statement, the state representatives and councilwomen did not immediately offer support for Biden, the only major remaining candidate, stating that "support must be earned." They called on Biden to support several of Sanders' platforms, like Medicare for All, ending mass incarceration, and "a long-term economic restructuring."

"The Democratic Party must catch up to its base, which is boldly and rapidly charting a path forward – not simply for the good of the Party but for our nation and our world, as well."