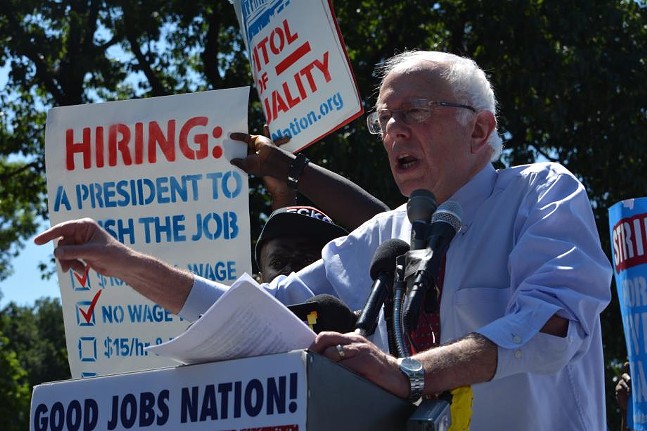 Photo: sanders.senate.gov
Sen. Bernie Sanders at a rally for $15 minimum wage
Presidential candidate Bernie Sanders has aligned himself closely with labor movements across the country. Not only is his campaign one of the few to have unionized workers, but he has also used his bully pulpit to pressure large employers without unionized workforces, like Amazon and McDonald's, to raise wages of employees.

And now he is bringing that effort directly to Pittsburgh and the region’s most contentious labor-rights fight.

On May 25, the Sanders campaign sent out an email to its huge list of followers, asking them to join the striking UPMC workers at UPMC Montefiore in Oakland.

“For years UPMC's billions have made executives rich, while thousands of hospital workers remain underpaid, underinsured, and in debt to their own employer,” reads the Sanders emailed obtained by Pittsburgh City Paper. “Yet when UPMC workers try to form their union, they are met with harassment, intimidation and even illegal firings. … They’re going on strike for a better life — can you join them in solidarity at UPMC Montefiore on Tuesday?” 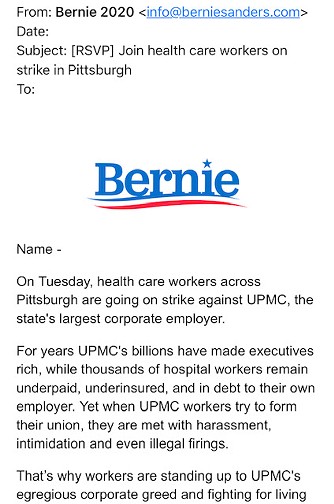 Screenshot of Bernie Sanders campaign email
Allegheny County UPMC hospital workers will be striking on Tue., May 28 outside of the Oakland hospital, where hundreds will address UPMC board members as they attend their annual meeting. According to a press release, “Hospital workers, elected leaders, community and faith leaders, and taxpayers will attend the meeting to demand UPMC act in keeping with its charitable mission and end practices that harm patients, workers, and the community.”

UPMC has come under increased scrutiny for its anti-union tactics and sluggish pace to raise wages, despite the fact the health-care giant has been rapidly expanding and its executives pay increasing. UPMC president Jeffrey Romoff’s compensation last year jumped more than $2 million to $8.54 million. Meanwhile, many UPMC employees are going into medical debt.

The Sanders campaign is hoping to boost the number of those protesting and asks attendees to “stand in solidarity with health care workers.”

This isn’t the first time Sanders has used his campaign’s extensive email list to support events where his campaign will not be attendance. On May 23, Sanders emailed campaign supporters and asked them join McDonald’s workers who were striking in Los Angeles, Chicago, Detroit, Tampa, St. Louis, Milwaukee, and several other cities. Those fast-food workers were asking for a $15 minimum wage and the right to form a labor union.


Sanders has been open in his support for UPMC workers. At an April 14 rally in Oakland, the Sanders campaign invited UPMC Presbyterian administrative assistant Nila Payton to speak to the large crowd in Schenley Plaza.

Several Pittsburgh-area politicians will attend the May 28 protest, including Lt. Gov. John Fetterman (D-Braddock) and state Reps. Summer Lee (D-Swissvale) and Sara Innamorato (D-Lawrenceville), who have all been vocal supporters of Sanders in the past.

The community rally starts at 12:15 p.m. and will meet at the corner of Terrace and Darragh streets in Oakland.