An unsettling thriller about the breakdown of a sound engineer, packaged as an homage to 1970s Italian horror films 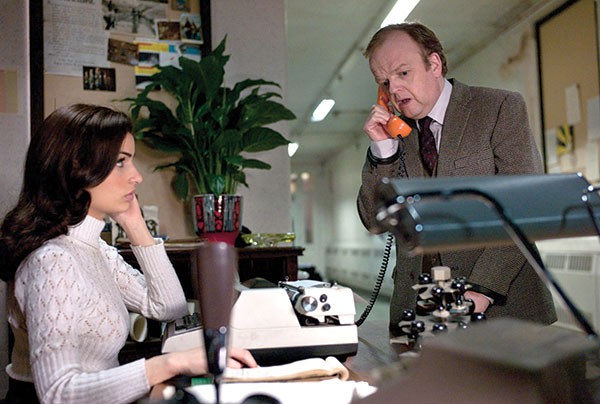 Toby Jones (right) can't get anyone to listen.
In English, and Italian, with subtitles. Fri., July 19, through Sun., July 21. Melwood.

Berberian Sound Studio is a stylish and unsettling thriller about the unraveling of a sound engineer, a mild-mannered Englishman named Gilderoy (Toby Jones). Peter Strickland's film is a period piece set in early 1970s Italy, where Gilderoy travels to work on a film called "The Equestrian Vortex." It's not a nature film, as he thought, but a horror picture about devil worship.

Strickland's film is also an homage to, and deconstruction of, '70s Italian horror, in all its lurid glory, as well as a fascinating informational piece about sound recording for film.

It's Gilderoy's skill — matching sound to heighten visuals — that is his undoing, as he juices up the sexualized violence of the film. (He assumes the role of killer, stabbing a cabbage in time with the film to create the squelch of knife wounds, as a pre-recorded voice screams in agony.) Berberian recalls similar skills-to-madness existential works such as Peeping Tom, Blow Up and The Conversation.

The film will be most enjoyed by those familiar with vintage Italian horror (Fulci, Bava, Argento), and interest in film-about-film. Others may find it slow, and with little plot. Berberian wraps up with an enigmatic ending that isn't nearly as satisfying as the ratcheting up of tension that preceded it, but the desired effect is clearly one of disorientation. Film and reality, in the right hands, can be an indistinguishable jumble, as poor Gilderoy discovers.