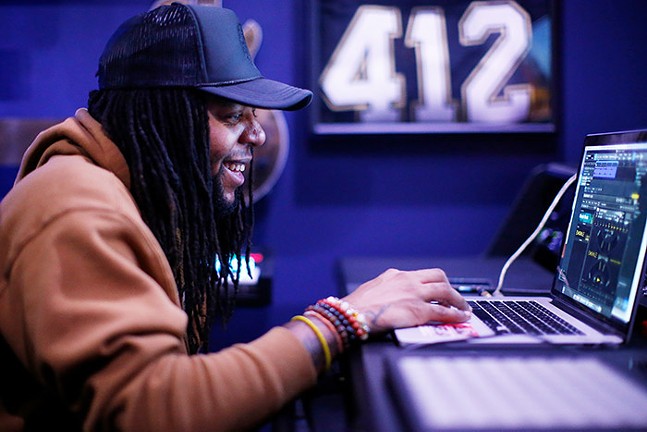 CP Photo: Jared Wickerham
Benji. works on his music inside ID Labs on Sat., Jan. 23, 2021.
For many musicians, finding mainstream success beyond their hometown is a dream that takes years to achieve. But Pittsburgh has seen some musicians, especially those in hip hop, rise to national and international fame.

One of those musicians is Benji. With his most popular song at over 1 million streams and over 30,000 monthly listeners on Spotify, Benji.’s numbers speak for themselves.

He shared how his early experiences shaped his musical path from a teen to an adult.

“My parents, when I was around 3 years old, would let me sit with the drummers in church to watch and learn, then occasionally play after service until they bought me my own white Pearl drum kit for the house, and the rest was history,” he says.

Benji. wrote his first song when he was 17 and his first beat at 18 during his freshman year at Duquesne University. By the time he dropped out of college in 2015, Benji. says he could play seven instruments.

“As far as training goes, there is no better teacher/coach than life itself. My purpose has always been to contribute to the relatable circumstances of our existence through my truth and mine alone, so that others can either learn or find the courage to be comfortable telling their truth as well,” he says. “With that said, finding the formula musically to properly conduct that flow has been a real challenge over the years and will continue to be for years to come, as is the challenge for all artists of all mediums, but it's been fun and a hell of a rollercoaster to say the least.”

Benji’s quest to find that flow can clearly be seen in his catalogue, but especially in “On God.” It's a track that sounds like the culmination of years of honing skills and passion. The song is full of bravado and brashness. From the second the beat kicks in, thumping against your ears, it’s in your face and bold. The lyrics only add to that vibe:

“I run the show / I run the clock out / Your time is up now / Ride the wave, you’ll find the lighthouse, when all the lights out / I made a way / I made it happen / I’m fuckin wasted / A celebration for the payout, for all my patience / Take the homies to the steakhouse, we say our graces”

“On God” is aware of Benji.’s success, and is an homage to how far he’s come in the notoriously ruthless and unforgiving music industry. He has also had to overcome personal hardships, including finding out that a child he had with his girlfriend was not really his, and losing a friend to suicide. Both of these experiences inform Smile, You’re Alive!, the candid album that originally came out in 2018, and one which he’s been rerecording for an anticipated rerelease his Facebook page says is “ON THE WAY!”

As someone who is seeing success beyond the Pittsburgh music scene, Benji. knows that the city has, in some ways, been integral in forming his talent and musical know-how.

“I'll always consider myself a Pittsburgh musician, and I'm proud of that. People need to know where someone like me comes from so they know that anything is possible from anywhere,” he says. “I have dreams and goals beyond this city, and to acquire such a wider audience in the manner that I did means a lot at this moment in time, especially for not having dropped any piece of solo music officially in over two years.”

Benji. says that collaboration was the key to success. He mentions the many places he performed and the musicians he stood alongside. He played basement jams and speakeasies for years in places like The Bushnell and James Street Gastropub. He worked with other local musicians like Clara Kent and Livefromthecity through Flow Lounge, an Oakland space he says allowed artists to showcase themselves. He also gives a shout out to BOOM Concepts, the Garfield-based collective that often hosts artists and musicians.

“On God” makes note of the importance of collaboration in its final moments with “I think I might need a prayer or two / Hail mary full of jungle juice / If you with it Ima thug with you / If you ain’t ’bout it, I don’t fuck with you.”

The song is full of moments that both make note of Benji’s progress while also nodding to collaborators and others who have supported him through the years.

“The journey has had its ups and downs just like any journey,” he says. “You find out a lot about yourself, good and bad. If you commit, ultimately those ups and downs shape you into the person capable of handling the next set of ups and downs as you go along, and so on and so forth. When you look back and realize the floor you're standing on was once a ceiling above your head, it makes it all worth it to keep going.”Benji. soundcloud.com/avatarbenji