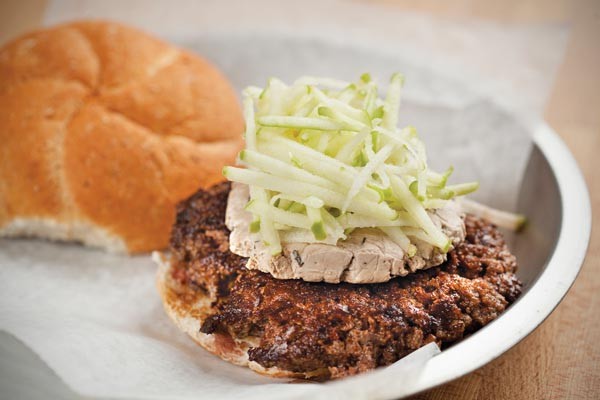 In this trying economy, upscale dining has become harder to sustain, but restaurateurs are a resourceful bunch. Many are making it work by introducing limited menus of economical foods, such as noodles, waffles or burgers, and embellishing them in a variety of thoughtful if not extravagant ways in settings which are chic yet blue-jean friendly. This strategy for blurring the line between upscale and downscale happens to work well, not only for tight budgets, but also for our contemporary lifestyle, in which everyone, everywhere, seems to be "business casual" all the time.

The latest example of note is Benjamin's Western Avenue Burger Bar on the North Side, where the menu consists of a matrix of burgers (two sizes, nine topping combos, beef or veggie patty, and optional gluten-free bun) and four other sandwiches. Additionally, there are eight beer-friendly "snacks," which range from roasted almonds to a Crested Duck charcuterie platter. Prices aren't diner-cheap — the basic cheeseburger is eight bucks, with a "Top Shelf" option for $1.50 more — but neither does every option aspire to the refinement of a burger with red-wine-braised onion and truffle mustard. The BLT, for instance comes with American cheese, and there's the inevitable breakfast burger with fried egg, bacon and home fries on top.

Benjamin's interior reflects its casual-chic aspirations as well, hitting a sweet spot between hip lounge and casual hangout. A gas fireplace in the dining area opposite the bar provides a warm focal point amid substantial wood tables and seating on a simple padded bench. Up a half-story is the billiard lounge, with cushy couches that feel modern but unpretentious.

Our snack of "pickled stuff" was a surprise hit with Angelique, who isn't a fan of most things under that general heading, but relished the piquant bites of cauliflower, beet and hard-boiled egg. The secret was a balance that was neither too sour nor too sweet, but employed a judicious mix of spices; the flavor went well beyond typical European mustard-and-dill into Middle Eastern, even Indian territory, punctuated with an assertive bolt of heat. The egg both explained the popularity of those weird jars of purple eggs you've seen in dive bars and rest stops, and rebuked them; it was seasoned by the pickling spices without becoming rubbery or overwhelmed by acid.

We ordered a Regular Guy beef burger (the smaller of the two sizes; the weight wasn't listed, but it seemed to be in the six-ounce range) topped with rosemary-balsamic goat cheese and green apple. The burger itself — made of brisket, short rib and sirloin — was excellent, tender and juicy. The flavorful cheese made a neat circle — it seemed to have been melted and then placed on the burger — and the apples had been cleverly cut into slaw-like matchsticks, so that their crispness didn't become a distraction.

Benjamin's also makes its own veggie burger from sweet potatoes, chick peas and herbs. It made for a delicious patty with a creamy, not crumbly, texture that even got some crisp edges on the grill. Angelique's only quibble with hers — a Mexican-style concoction topped with green chiles, salsa and chipotle sour cream — was that the tomatoes were cut into the same large chunks as in the side salad, so that they rained out of the burger instead of staying put.

Pulled pork had the meaty chunks we associate with the patient process of hand-pulling, as opposed to the fine threads that result from mechanical shredding, and the house barbecue sauce walked a satisfying line between a sweet tomato base and a peppery mustard one. House slaw on top added its own kicky flavor rather than mere bland creaminess. The whole comprised a better sandwich than most local barbecue places can claim, let alone most general-service restaurants.

Our final sandwich was the irresistible house-made lamb sausage with peppers and onions. The vegetables were cut thin and cooked to nearly melting tenderness, while the sausage dripped with juices. Rather than conveying greasiness, however, the effect was the kind of richness you get with long-cooked short ribs or pork shoulder, and a topping of hot-sauce mayo provided perfect counterpoint. This was all contained — barely — on a Breadworks roll that had just enough crust without too much resistance.

A side of home fries, made of a medium dice of potato, was nearly perfect, tender inside, occasionally crisped, and studded with caramelized onion. Other than a smidge too much salt, these home fries were among the best we've ever had, and put most breakfast places to shame.

Show up at Benjamin's in jeans or in post-party formalwear, and you'll feel equally at home. The atmosphere is comfortable and welcoming, the food is simply outstanding, and the pool table is in great condition.