"We so believe in what Ben is doing, so we wanted to find a way to make it happen." 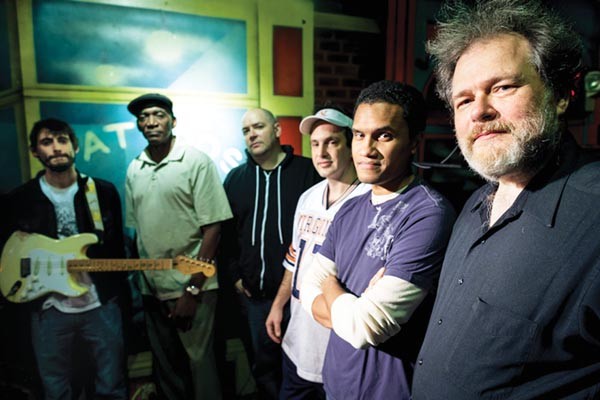 It starts with Miles: Flexure (Ben Opie, at right)

Given the chance to write, rehearse and record in any space in Pittsburgh, there are plenty of musicians who would head straight to the New Hazlett Theater on the North Side. The theater — with its great acoustics, top-notch sound system and in-house engineer, Dave Bjornson — is pretty much a dream for the audiophile. So you could imagine the heartbreak when jazz saxophonist Ben Opie found out he was denied funding for a residency he hoped to pursue there.

But it turns out that being turned down by the foundation he'd hoped would fund his project was just the beginning of something new for Opie and the Hazlett. And he credits Hazlett executive director Rene Conrad for pushing to make his short residency there this week happen.

"It was Rene who actually pursued it!" Opie says. "She actually went out and said to people, ‘We have this idea we think is really great, and the money didn't come through; would you be willing to donate to do a smaller version of it?' And it paid off. It's wonderful!"

The resulting event is not quite as grand as the original plan, but unique in its own way. From Thu., Jan. 3, through Sat., Jan. 5, Opie and his ensemble Flexure will complete a short residency (three days total) in which they'll write, rehearse, record and perform new music in the theater.

Opie is a longtime figure in local music: The former CAPA music teacher and current instructor at Carnegie Mellon has had plenty of jazz groups over the years, from the Water Shed 5tet in the '90s to the contemporary Thoth Trio (with bassist Paul Thompson and drummer David Throckmorton) and OPEK (a larger ensemble that had its roots in playing Sun Ra compositions). Opie also played in '80s local legends Carsickness.

Flexure is one of his more recent developments: The group had its first show about a year ago. And it's a bit different from what Opie had been playing in recent years. He takes much of his inspiration from Bitches Brew-and-later Miles Davis.

"The groups I've had in recent years — Thoth Trio and OPEK and other similar things — are largely acoustic-based groups," Opie explains. "I first of all wanted to have something that I thought was more of an electric band. And I've definitely been digging into that Miles Davis repertoire from 1970 to about 1975, a very specific time in his career, and not wanting to copy that music, but kind of come from a similar approach. Sort of stripped-down compositions, and a lot of room for improvisation and group play."

The original proposal called for a months-long residency. "That would've been me really housing myself at the Hazlett for the summer," Opie says, "and writing and recording and performing."

The shorter residency will work like this: Flexure installs at the theater on Thursday afternoon. ("We'll set up, sound check, and if we get anything recorded, that would be wonderful," Opie explains. "If we don't, we have all of Friday afternoon to record.") Saturday evening is the live performance, open to the public. Everything that goes on over the course of the residency — recording sessions and live performances — will be recorded, so that any of it can end up in the final cut.

Bjornson, who has worked with Opie's groups before (he engineered the first Thoth Trio album, and has done live sound for groups like OPEK at the Hazlett in the past), will be behind the massive control panel in the theater's basement.

It plays right into the mission of the New Hazlett, which is the former home of Pittsburgh Public Theater, and has been hosting performances — dramatic, musical and otherwise — under its current name since 2004.

"We consider ourselves an incubator for the arts," says executive director Conrad. "There are people at all levels who come here to use the theater. We don't just unlock the door for them; we're involved in what they're doing."

While Conrad herself came to the New Hazlett from Quantum Theatre, she notes that there's a particularly strong music orientation at the venue. "We have the most core competencies in music," she explains. "Dave [Bjornson] and much of the staff are involved in music."

Opie, who first worked with the Hazlett on a project that brought legendary saxophonist Anthony Braxton to town in 2008. (The New Hazlett, then under the direction of Sara Radelet, helped Opie fund that project, though it was ultimately housed elsewhere.) Opie brought the residency idea to the theater with his vision, and Conrad and programming manager Alex Bard decided that even when their original proposal failed to get its funding, they wanted to go ahead with some form of the project.

"We so believe in what Ben is doing, so we wanted to find a way to make it happen," Conrad says.

As a venue and studio, the theater might rest a bit in the shadow of the nearby Manchester Craftsmen's Guild, and Mr. Small's, just up the river. For his part, Opie believes in what the Hazlett is doing for music in Pittsburgh.

"We wanted to shed light on the fact that the Hazlett is not only a superior place for live music performance, but also that it has great recording capabilities," he says. "We want to bring attention to that."