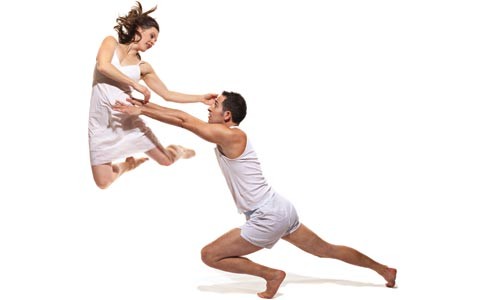 At first glance, choreographer Ben Munisteri's works suggest the classic modern dance of Merce Cunningham and Paul Taylor. Quickly, though, you realize that there is much more: throwback style paired with more contemporary movement, creating a refreshing and distinctive mix of old and new.

Munisteri's up-and-coming, New York-based Ben Munisteri Dance Projects presents three works, including a preview of his latest, "Robot vs Mermaid," on Thu., April 7, at Indiana University of Pennsylvania. First, though, he and the company present a lecture-demonstration about the creative process behind "Robot vs Mermaid" (created during a residency at IUP) on Sun., April 3, at Greensburg's Palace Theatre.

"I was realizing more and more I was interested in dance that wasn't narrative-, character-, emotion-based or about a specific theme or social issue," he says by phone from New York. "What I really like are the textures, rhythms and patterns I can create compositionally."

Like acclaimed choreographer Laura Dean, Munisteri's newer works flow from geometrical, symmetrical and asymmetrical spatial design in concert with music. Munisteri says there are still relationships between the dancers onstage. They are just more subtle.

"We put our own meanings on human beings when they are half-naked onstage moving around," says Munisteri. "I don't mean to obviate their personalities or individuality; those are still present, [but] just as an added element to what is being done compositionally."

"Those pure-dance quintets of 'Catalog' were riveting," wrote Alastair Macaulay, in The New York Times. "Moment by moment, who could tell what would happen next?"

Munisteri says he often bases new works on existing ones. Thus "Binary 2.0" (2010), which premiered as a duet set to music by the Pixies is now a group work, a la "Catalog," set to music by Debussy.

The program closed with "Robot vs Mermaid," set to music by Kirk O'Riordan and British electronic music duo Goldfrapp. The work blends rigid and robotic movement qualities with soft and fluid ones, and this performance features four dancers from IUP's dance department.