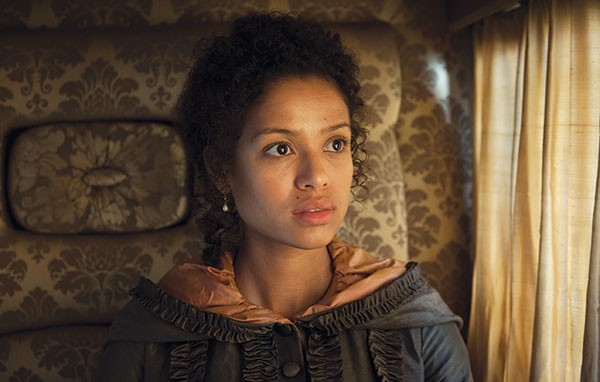 In late-18th-century Britain, mixed-race Dido (Gugu Mbatha-Raw) is raised in genteel wealth by her white father's family, headed by Lord Mansfield (Tom Wilkinson). But while she enjoys tremendous privilege, her coming-of-age is complicated by both her gender and her race.

Amma Asante's film Belle is an historical fiction, inspired by a painting of real people (Dido and her cousin, Elizabeth) and incorporating a significant legal case regarding slavery, presided over by Lord Mansfield.

As such, it's a swirl of larger issues — the legal and cultural limitations of gender and race, and the burgeoning abolition movement — intertwined with domestic melodrama (love and marriage). The film also works to draw parallels between the state of slaves and women, vis-à-vis their lack of agency: "We are but their property," bemoans Elizabeth. But marriage isn't enslavement, and it's a tougher sell when we only see rich people courting and none of slavery's visceral ugliness.

Belle can get a bit soapy: It has all the heaving bosoms in gorgeous dresses, overheard secrets and upper-class side-eye you'd expect from a quality period parlor drama. So it's entertaining in that respect, if a bit lifeless: Its heroes and villains are clear, as its outcome, and its predictable romantic travails tend to reduce the film's meatier issues to mere obstacles along the path of true love.