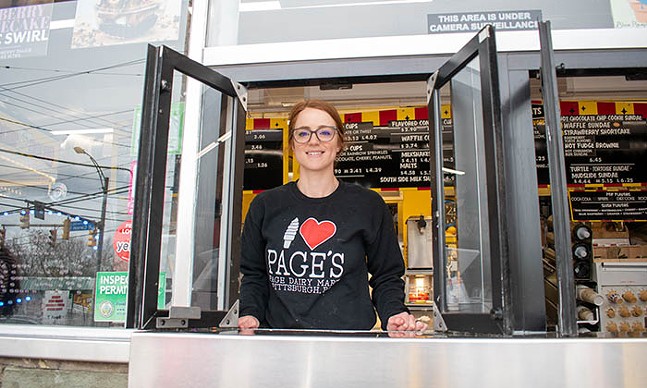 To go with the newly shortened name, Marjorie Page Prusia, co-owner of Page’s and the fourth generation of the Page family to run the establishment, bought a new neon sign to replace one she estimates was 40 years old.

Prusia and her husband Jared bought the family business from her parents in March 2020. Now in their third season owning Page’s, they have been making subtle improvements to complement the store’s existing strengths. In previous seasons, they added an oat-based, non-dairy soft serve option and the ability to take credit card payments. This season, a bigger grill and new ovens have dramatically increased their hot food production.

Pittsburgh City Paper decided to visit this institution to see what makes it tick, and what kinds of improvements customers can expect as it enters its 71st season.

“We need new blood,” says Chuck Page, Marjorie’s father and the store’s previous owner, during a conversation by the coolers in the back of the restaurant. Although Page no longer owns the place, he still comes in a few days a week to help out, and Margie and Jared say his help is invaluable. 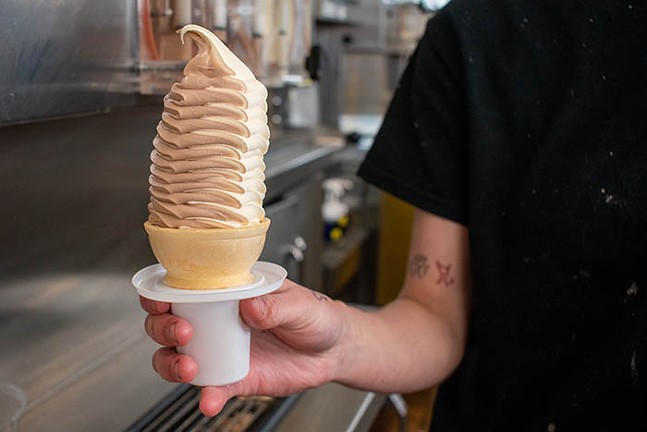 CP Photo: Pam Smith
Page’s non-dairy option
Page’s decided on an oat-based recipe for their non-dairy soft serve after an almond base wasn’t creamy enough and a coconut base was too coconutty, according to owner Marjorie Page Prusia.

When a customer orders Page’s non-dairy, oat-based vanilla soft serve, the worker at the register often asks if it’s due to a preference or an allergy. “We want to keep our customers safe,” Prusia says. “We want them to be fully aware of the potential of cross contamination because we don't want to harm anybody.”

If the oat milk soft serve is coming directly out of the machine into a cone or cup or sundae, Prusia says the risk of cross contamination is pretty low. But if someone with a dairy allergy orders something that requires more processing like a milkshake, the team makes sure to limit the risk of cross-contamination.

“If you tell us it's an allergy at the window, we'll clean and sterilize everything,” Prusia says.
Nearby, three workers and occasionally Prusia wait on customers from one of two windows at the front of the store, and then turn promptly around to the grill or to one of Page’s eight frozen dessert-related machines to prepare the order.

“You kind of get used to dodging people,” says Prusia.

In a slim kitchen area spanning approximately one third of Page’s one-story building, they have a shaved ice machine, two soft serve machines, a milkshake machine, two Arctic Storm machines, a blender, a slush machine, and at least one machine to warm up dips for soft serve cones.

“There’s always one breaking, too,” Prusia jokes of the appliances, like the one that broke on them on March 9, this season’s opening day.

“This is the best place in town and nobody leaves here unhappy,” she says. “It’s a community institution.”

When asked what she likes to order, she replies, “I have my own button.”

CP Photo: Pam Smith
On the origin of the Blizzard
Not long after Chuck Page came back to work at his grandparents’ store, Dairy Queen released the Blizzard, a thick blend of ice cream and add-ins that was hugely popular at its release and remains so today. Page says he “always wanted” to serve those thick, custardy shakes, but he didn’t have the right tools.

“If you were to put it on your milkshake machine, it would burn it out. It was too thick,” he says.

When the company that made the Blizzard machine began selling it to other ice cream shops, Page got one right away. He named Page’s take on the thick shake an Arctic Swirl. “Up until that point, soft serve was kind of sleepy. That changed everything. There are certain things that are an instant success. [The Arctic Swirl] was one of them,” Page says.

According to Page (and corroborated by one of the patent holders for DQ’s Blizzard machine), the idea for an extremely thick milkshake came from a St. Louis ice cream shop called Ted Drewes Frozen Custard who started making what they call “concretes” in 1959, “a malt or shake so thick that it is served upside down."
Prusia clarifies that Ms. Deb stops by so often it was more convenient to make her regular order — chocolate ice cream with extra peanut butter, extra pecans, and sometimes a cookie — its own selection on Page’s point-of-sale system. According to the system, Ms. Deb visited Page’s about 175 times last season.

Charles Alexander Page, Page’s great-grandfather, opened Page Dairy Mart in 1951 on land his great-great grandfather purchased in 1916. According to Page and Prusia, Charles was in Florida when he first encountered soft serve. He sensed it was going to be the next big thing, so he brought it back with him to Pittsburgh. He was right. (Similarly, Page tells me, “We were the first in the ‘60s to have slush.”)

Page’s has been a local staple ever since it opened. Today, they serve a mind-boggling array of dessert options, including about two dozen different soft serve flavors in addition to the classic vanilla, chocolate, and twist options. There are also sundaes made with warm baked goods, milkshakes, snow cones, and Arctic Swirls, plus some tasty savory options, including a steak sandwich.

If the line seems long, people, including the owners and Yelp! reviewers, say it goes fast. If the parking lot seems full, Page’s rents the fenced parking lot behind theirs for overflow. It’s worth the wait and the brief game of automotive Tetris.

Although both grew up working at Page’s, neither Prusia nor her father Page set out to own their family’s ice cream shop.

“I didn’t want to do it,” Page, who was the third generation of Pages to own and operate the store, tells me. He says he reluctantly decided to work at Page’s after graduating from Robert Morris University in 1981 and being unable to find another job in the area.

“There were no jobs in Pittsburgh,” he tells me, “and I wanted to stay in Pittsburgh.” Ultimately, though, he says, “It grows on you, and it’s nice to have success.” 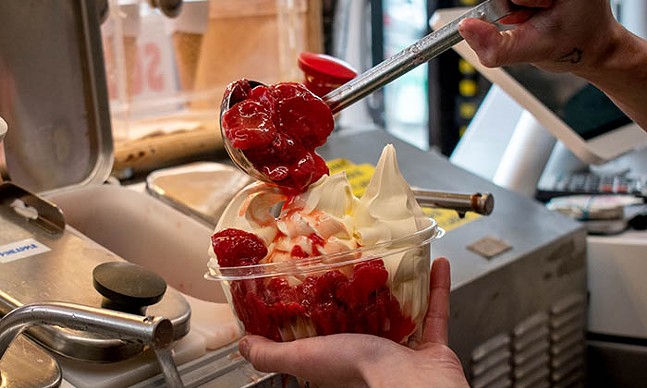 CP Photo: Pam Smith
A rare scoop: If you like these flavors, you’re unique!
Page’s owner Marjorie Page Prusia and the workers Pittsburgh City Paper polled said some of their less popular desserts include the Raspberry Almond Torte sundae, the Belgian Waffle sundae, and anything involving blackberry soft serve or butterscotch.

Prusia and her employees say sometimes customers ask to be surprised by their ice cream order. Instead of giving them one of their more adventurous menu items, Prusia jokes that it would be funny to give a vanilla cone to someone who had requested a surprise, saying, “The surprise is the disappointment.” (But according to City Paper editor in chief Lisa Cunningham, who loves a plain vanilla soft serve above all else, Page’s “absolutely holds up.”)
Similarly, although she also worked at the store as a teenager, Prusia didn’t think she’d own it.

“I would come down with my dad in the evenings when I was like a little kid, like 12 years old, help him clean and build stuff. I started waiting on customers probably when I was 14. I'm almost 30, so I’ve been doing it for a while,” Prusia says.

She says she went to school for nursing and worked in a hospital for a while before her father asked her to work at Page’s.

Since she and her husband bought the business, Prusia says,“We’ve experienced growth every year.”

On the weekends, they’re likely to be busy all day, so if you want to miss the rush, Prusia recommends visiting weekdays before 7 p.m.Page's. 4112 Carson St., South Side. pagedairymart.net

These Pittsburgh CSAs will fill your home with spring flowers