Back of House is a new monthly feature, highlighting the people behind-the-scenes in Pittsburgh's food and beverage industry.

How long have you worked here and how did you get started?
I started about six months after it opened, almost four years ago. I knew Chad [Townsend, co-founder and co-owner with Lauren Townsend, also his wife] from working with him at Salt of the Earth. He called me at the other job I was working and told me, “Come start here now.” I didn't right away, then he called me a week after that and was, like, “Just quit right now.” So I did.

Was this your job when you started?
At first I was producing ice cream and helping the production manager.

How did you get from that position to this one?
Being here and trying to keep improving myself, building from where I started.

What do you do every day?
Make sure everyone is doing what they have to do prep and production-wise, see what wholesale accounts need and what stores need, and making sure those things get done. Lots of phone calls and computer work.

CP photo: Joie Knouse
Do you have a favorite part of what you do?
I don’t think I actually have a favorite specific part, more the whole experience in itself. Of course, there’s some days that I’m frustrated like any other place, but the overall aspect of it is that I love doing it.

What is it you love about it?
One of the reasons is looking back and remembering when I first started and how different everything was — we had one ice cream machine and one freezer. Building and getting better and improving each day with everything. Even going to different Giant Eagle locations and seeing the pints in stores, that’s exciting.

How do you make ice cream?
There’s a standard base: milk, cream, sugar, salt, and egg yolks all mixed in a big pasteurizing machine. After about three hours, you have several buckets of that base and from there you’re adding to it, you’re making chocolate or making coffee or making dolce. After you’ve flavored the base, you put it into the smaller ice cream machines and then it gets frozen from there. Once you have the base done, it doesn’t take that long. For a three gallon ice cream bucket, it can be frozen completely in one-and-a-half, two hours.

Where do you get the ingredients?
We have a few main places we get things from. Dairy is from Turner Dairy. We get other things from other farms.

How much do you produce?
An average of 100 gallons in large buckets per week, and 100 pints average per week.
click to enlarge 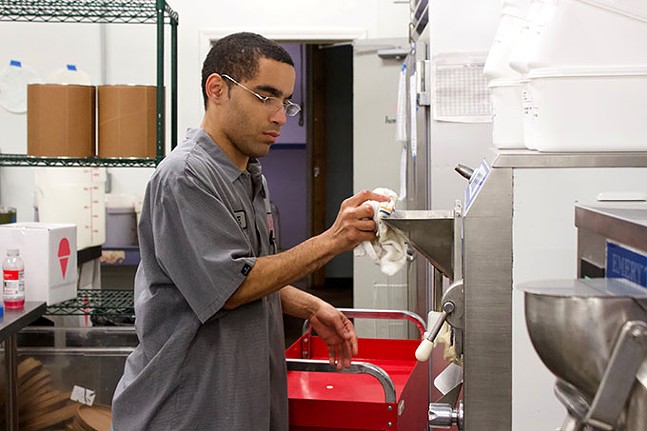 CP photo: Joie Knouse
Does it slow down after summer?
The shops are open every day. We’re sending stuff out every day. During the summer, we’re here seven days a week, but now it’s five or six days. It drops off a tiny bit with our shops, but as for the other accounts, not that much. There’s always enough things to be done that walking around wondering what to do is not ever an issue. About every two months, there’s different releases, ongoing and seasonal. Soon there’s going to be a couple other fall flavors, like Mexican Hot Chocolate and Toasted Oat.

Are you involved in creating the new ones?
A little bit but not as much now because we have a production manager, Rachel, who’s really creative and is able to think of great new flavors.

Do you like ice cream?
I do. I don’t eat it at home on my downtime as much as I used to, but I do.

Latest in Back of House

More »
More Back of House »
All Food+Drink »
Comments (0)
Comments are closed.