Behind a new album, comedian Steven Wright plays Pittsburgh for the first time in five years.


It's 1979. You're at the disco club jerkin' and jivin' to "Stayin' Alive." Coke's in your veins, and your bell-bottoms are kicking up dust. Nothing can keep you from groovin' the night away.

Suddenly, the music dies, the room goes dark and a mic-stand hits the center of the dance floor.

Comedy night at the disco? Club-goers are bewildered and upset. But imagine being the comic hired to entertain these drugged-up drunkards.

Steven Wright doesn't have to imagine such a scene. He's plagued with its memory.

Fortunately, 28 years in the business has propelled Wright to more prestigious stages. When he visits the Byham Theater, on Oct. 17, Wright won't be surprising anyone. Everyone will be there to see him -- the 51-year-old veteran famous for his one-line non sequiturs, delivered in a monotone so deep it makes Johnny Cash sound like Mickey Mouse. On helium. After getting kicked in the groin.

The Pittsburgh stop is part of Wright's national tour for I Still Have a Pony, the album version of his 2006 Comedy Central special, When The Leaves Blow Away. The CD is just his second -- and his first since his Grammy-nominated 1985 release, I Have a Pony.

Despite the 22-year lag between albums, Wright has been very active on the stand-up circuit, on late-night talk shows and in film. However, it's been more than five years since he visited Pittsburgh.

Wright, who lives near Boston, earned an Academy Award in 1989 for his short film "The Appointments of Dennis Jennings," which he starred in and co-wrote. He also appeared in the feature films So I Married an Axe Murderer, Natural Born Killers and The Muse.

"I prefer writing the material, and performing it live," says Wright, speaking from Rhode Island. "But I love doing the film for a change of pace."

Wright hopes I Still Have a Pony attracts a younger audience who might know him only as "the guy on the couch" from the 1998 stoner smash Half Baked.

"I started noticing a few years ago that there weren't many high school kids or people in their early 20s in the audience," Wright says. "So then I thought, 'Well, I've got to reach some younger people and also get some stuff out for the people who already know me.'"

On I Still Have a Pony, old fans will get more classic punchlines. "A friend of mine has a trophy wife, but apparently it wasn't first place," the comedian quips on the album.

Younger fans need not worry: Getting Wright's humor doesn't require a degree in political science. All it takes is a pulse. "In school they told me 'practice makes perfect,' then they told me 'nobody's perfect,' so then I stopped practicing," Wright jokes on the record.

Perhaps surprisingly, Wright dismisses the importance of his unique style.

"Audiences don't care about style or anything, they only go by, 'Is it funny or not?' This is just the way I think of jokes," he says. "I'm not trying to think of one-line jokes. It just comes naturally."

His voice comes naturally, too. Asked when puberty claimed his youthful pitch, Wright laughed, saying, "I'll have to check the tapes."

But while his tone is unwavering on stage, Wright jokingly admits that "if somebody cut me off in traffic, I'd be yelling at them or swearing at them."

Considering his deadpan demeanor, that scene's hard to imagine. Then again, it's no more unbelievable than picturing Wright claim that circa-1979 disco club for a 90-minute stand-up set, telling a confused, coked-up crowd that "if heat rises, heaven might be hotter than hell." 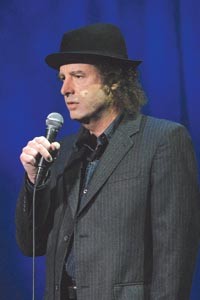 The guy off the couch: Steven Wright.