Before you boo NFL anthem protesters, get a grip on what you are protesting | Sports News | Pittsburgh | Pittsburgh City Paper

Before you boo NFL anthem protesters, get a grip on what you are protesting

There is no right or wrong level of reverence for a piece of red, white and blue cloth 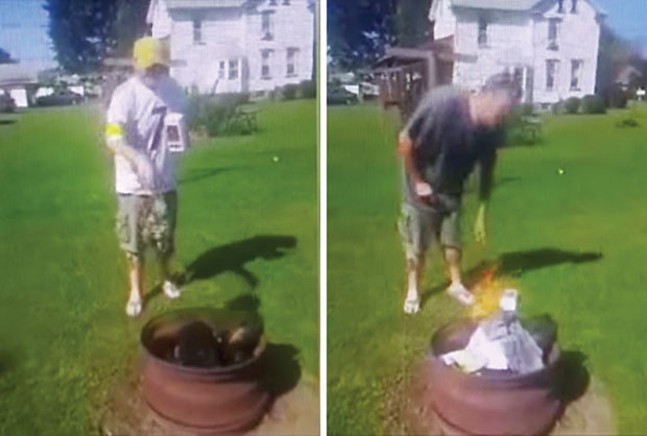 When you take the time and drill down into the protests of the national anthem, there’s really only one thing behind the anger directed at the athletes: fans' intolerance to opinions different from theirs.

This all started when then-San Francisco quarterback Colin Kaepernick got fed up with the ever-growing number of unarmed black men being killed by police. First he sat for the anthem and no one noticed. However, after talking to a friend and U.S. military veteran, Kaepernick decided to kneel because he told him it was more respectful.

Now, here we are a year later. Kaepernick is out of a job, and more and more players have been protesting by taking a knee. Then, Donald Trump got into the fray by saying players should be fired for kneeling; he called them sons of bitches and complained that the game isn’t violent enough anymore. This led to more players taking knees, and that fired up the various rubes, racists and wingnuts (a.k.a. Trump’s main base of support), who began booing and burning their jerseys, hats and season tickets.

I spent a lot of time watching these protest videos. They involved a lot of white folks wearing camouflage pants, burning their clothes in metal drums and old Weber grills. They all said they were protesting because of the lack of respect that players, coaches and owners who knelt were showing the country, the flag and the veterans who fought for the Stars and Stripes. They threw around a lot of “ain’ts” and misplaced “thems” in explaining that NFL players were a bunch of traitors.

Two Sundays ago, the Steelers couldn’t decide what to do in protest, so they decided to stay in the locker room. Not surprisingly, Steelers fans made up a great number of these clips, including the fan in the above screenshot. After burning his merchandise, he looks at the camera and says “This is what your black lifes (sic) matters get for ya. Thanks, Mike Tomlin.” Follow that up with now former Muse Township Fire Chief Paul Smith taking to Facebook after that game to call Mike Tomlin the racial slur starting with the letter “n,” and it doesn’t take long to really see why these protests are happening.

The whole “disrespect the flag” nonsense here is nothing but a red herring. We all know why the players are protesting, because they have clearly said so. They are protesting a country that does not treat all of its citizens fairly. Or, as Kaepernick said way back at the beginning of this: “I am not going to stand up to show pride in a flag for a country that oppresses black people and people of color. To me, this is bigger than football and it would be selfish on my part to look the other way.”

If you’ve never experienced the kind of inequality that African Americans deal with, it’s easy to not listen to the whys and wherefores of this issue and just label these players traitors and whatever else. But if you listen and pay attention and do your own research and look at the issue outside of your own identity, it’s also pretty easy to see what’s going on in this country. If you honestly do that, you may still not agree with these protests, but you’ll have to respect them. It’s not about the flag or veterans or a song penned by a slave-owning lawyer (no time to get into that one now). This is about equality and justice. But people don’t want to hear that because they don’t want to deal with it.

We all have different levels of love and respect for this country. This county and that flag means something different to everyone. That means there is no right or wrong level of reverence for a piece of red, white and blue cloth. If someone doesn’t want to stand for the anthem or the flag because their take on America is different from yours, that doesn’t make it a disrespectful act. Your act of booing is actually disrespectful not only to the players, but also, by your logic, to the National Anthem and the flag. Just because you’re standing doesn’t make it any less so.

You’re entitled to say that you think kneeling before the anthem is wrong, and you are entitled to boo. And with those gestures, you’re engaging in the same right to protest as the players. So ideally, by your logic, there should be another group of people standing behind you, booing you for booing them. We’ll get to the point where everyone is booing, and if everyone is booing, then no one is listening. And that’s what got us to this point in the first place.

Editor's Note: The first paragraph of this column was rewritten for clarity.