Before the Devil Knows You're Dead

Director Sidney Lumet is up to his good old tricks: Except for the sex, he's directed a very old-fashioned film 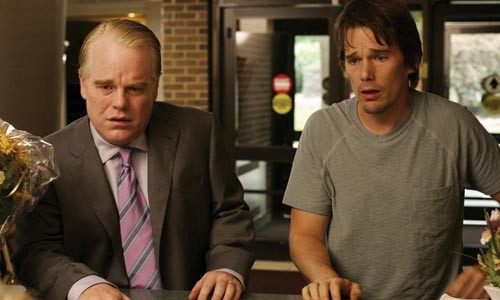 Before the Devil Knows You're Dead opens with two people going at it, doggie style, in a hotel room in Rio, the man's pale fat ass pounding away, his gut resting comfortably on the spine of his happy besotted lover. It's about as un-erotic as dirty sex gets, but they are, thank goodness, married, so this union is at least sanctioned by God.

Not so much for everything else they do in the course of the few weeks we spend with them. Some time later, they're back home in Manhattan, where Andy (Philip Seymour Hoffman) does six-figures-well in real estate, but not so well that he can support his embezzling, and certainly not his drug habit, which he fulfills by tooting blow in his office, then going to the penthouse of a nasty, wispy queen who shoots him up with heroin. Back home, he can't recapture the sexual magic with Gina (Marisa Tomei), whose self-esteem is lower than he is.

His brother, Hank (Ethan Hawke), isn't doing terribly well himself. He works for Andy's company, is three months behind on his child support, has a harping ex-wife who emasculates him with aplomb, and is fucking Gina every Thursday. So when Andy suggests that they make some fast money by knocking off a mom 'n' pop jewelry store at a strip mall in Westchester, he nervously signs on, even though the store is literally owned by their own Mom and Pop (Rosemary Harris, Albert Finney).

Things like this, as they say, can only come to no good, and they certainly do. When the heist goes south and their lives unravel, screenwriter Kelly Masterson slowly and artfully brings the walls in around them.

It's almost poetic that Masterson should see his first movie script directed by probably the oldest working director in American cinema. Sidney Lumet, now 83 years old, made his first feature film in 1957, and has delighted us with at least one great work in every decade since. That first one was 12 Angry Men. In the 1960s, he gave us Long Day's Journey Into Night, and in the '70s came Network and Dog Day Afternoon. My favorite of his films, The Verdict, is from 1982, and in the '90s he worked on the absorbing cable-television series 100 Centre Street.

In Before the Devil Knows You're Dead -- the title currently doubles as his career epitaph -- Lumet is up to his good old tricks: Except for the sex, and the requisite copious f-bombs, he's directed a very old-fashioned film, a pulpy heist procedural with characters of the type that flourished when he broke cherry directing episodic TV in the 1950s. It's also a Coen Brothers film, just not actually written, directed, produced or edited by them.

Lumet has rarely been a stylist, and in Before the Devil, his workmanlike camera focuses on people or follows them watchfully around a room. He concentrates his efforts, as always, on the actors, who are outstanding: We expect great work from Hoffman, but even Hawke performs well here. (Lumet claims to have saved Katherine Hepburn from herself when he directed her in Long Day's Journey, and I believe him.)

The visual landscape of Before the Devil is washed out, grainy and often over-lit, as if Lumet shot it on 16 mm then blew it up to 35. I think Lumet pictured his film as being in nuanced black and white, and this was the closest equivalent. It's neither intrusive nor helpful because we've seen it all before, including the allegorical plot (Cain, rather than killing Abel, takes him down with him), and the archetypal characters. They never quite move us, but they're absorbing to watch: They're concentrated versions of those places in ourselves that we hide away and, hopefully, can only imagine.

The lessons of Before the Devil are myriad, and bear repeating: Crime doesn't pay, hug your kids, don't play favorites. Oh: And don't fuck your brother's wife, of course. Fifty years ago, when movies like this first shocked us, we could go along with them and wonder what would happen next. We're more jaded now, so Before the Devil is merely an exercise in morality more than an actual lesson. Still, it's nicely made, and unlike so many classic films, it doesn't waste our time with even a modified happy ending. It seems like Sidney Lumet has beat the devil once again.