Greek scenery, a jovial meal, then a relationship in crisis 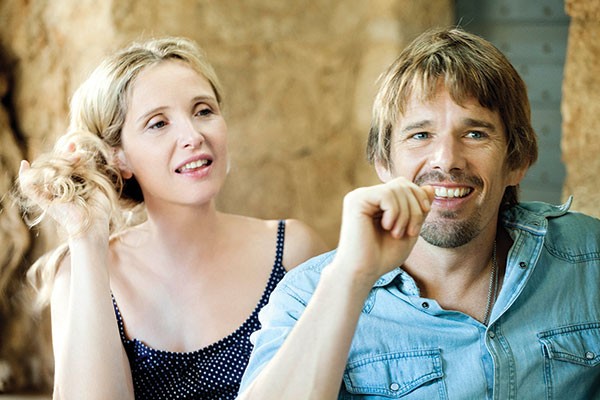 Traditionally, the "happy" resolution for romantic stories is marriage. But as Richard Linklater's Before Midnight posits, marriage is the hard part and the earlier falling-in-love story is a lot more fun.

In Before Midnight, we catch up with Celine (Julie Delpy) and Jesse (Ethan Hawke), who met in Vienna in Before Sunrise (1995), and reunited nine later in Before Sunset. Now, another decade later, the pair are married (more or less), live in Paris and are raising twin daughters. They're on a Greek vacation, but there are undercurrents of tensions. "This is how people start breaking up," Celine jokes (but not really) early on.

This film is broader than the previous two-man affairs — there is a lively dinner with other couples who debate relationships, and more scenery. But it all builds to Celine and Jesse alone in a hotel room having the kind of button-pushing argument that is an unwelcome result of familiarity. It's ugly, but the concerns are real, if mundane: how to balance the self with the couple, while also juggling careers, families and life's inevitable disappointments and frustrations.

Linklater's film is a bit gimmicky conceptually, some dialogue is too on-the-nose and he's still romanticizing sunny Europe. The final reel is good work by the actors, but its passive-aggressive intensity isn't exactly entertaining. Elucidating, sure, if you needed any reminder that movies' happy endings are anything but.