Before and After: Doing pet makeovers at Pittsburgh’s Dog Stop

“They have such little personalities.” 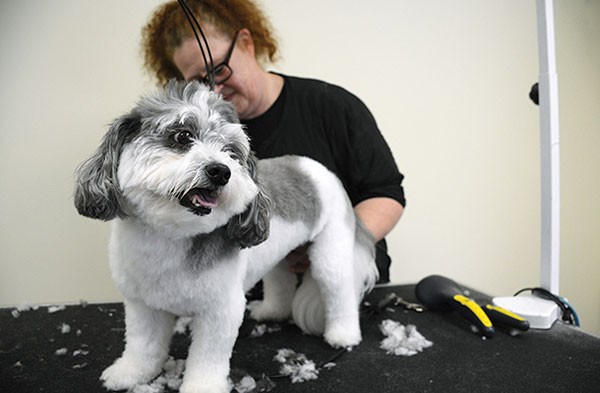 Photo by Stephen Caruso
Kim Slater grooms three-year-old Leah at Pittsburgh's Dog Stop. See the before-and-after photos of Leah and her sister Lily in our photo slideshow below.

Kim Slater has always liked working with living and breathing subjects — it’s just the number of legs has doubled.

A groomer at The Dog Stop on Perry Highway in Wexford, she guides dogs through their spa days — including a wash, brush, nail-trimming, ear-cleaning and a haircut.

“Growing up, my best friend was a St. Bernard,” Slater says with a laugh. Slater can remember sitting on her bed upset during “those teenage angst years” and having the dog, named Heidi, cheer her up “with those big eyes.”

That early impression carried over when Slater looked for a new start. Before her canine-serving career, Slater was a medical assistant, but a change in management made her feel she “was about to become a number.” So, she traded her stethoscope for shears.

“It was the best thing I ever did,” Slater says, as she trims Leah, a 3-year-old teddy-bear puppy that is one of her furry customers today. Leah was dropped off by her owner, Laura Jenkins. Leah’s sister, Lily, waits in a cage nearby for her turn on the dressing table.

A typical appointment takes 2-3 hours, though time varies depending on the dog. Sometimes, however, the finished product doesn’t last as long as the appointment.

“People say, ‘Yeah, I brought them home, but they found a mud puddle in five minutes,’” she says, as white and gray fur piles up beneath a happily panting Leah.

Slater is the owner of three “fur babies” herself — Dauber, Sunny and Jesse, all former canine clients she adopted. In fact, Dauber and Sunny lounge just a few feet away as she works.

While the hours she puts in pay her bills, they also let her join the pooches’ lives.

“They have such little personalities,” she says. “It’s great when you can be part of that."