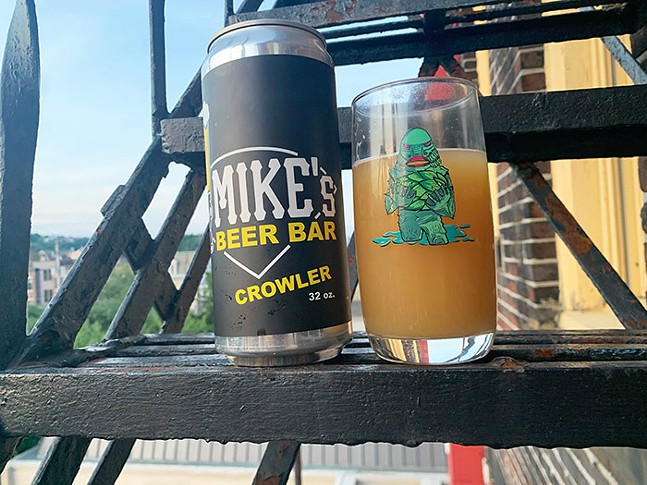 It’s a good couple of weeks to be Brew Gentlemen. The Braddock-based brewery, an institution in the local craft beer world, has become the resident brewery of the Allegheny Overlook, one of Pittsburgh’s hottest new destinations. Opened last Thursday, the summer-long initiative on Fort Duquesne Boulevard features live music, games, street art, food trucks, and Brew Gentlemen. And that’s great news for Pittsburghers, because the brewery routinely pumps out awesome beer, and their “Lou (2021): Ales for ALS” is my Pittsburgh Beer of the Week.

As the beer world starts to shrink distribution for its “hype” beers and make them harder to find, Brew Gentlemen remains incredibly accessible. You can wander into almost any beer bar or Giant Eagle, and pick up an elite Brew Gentlemen IPA for a reasonable price. In this case, I got Lou at Mike’s Beer Bar, then had to get myself a Crowler to take home.

Brew Gentlemen has been a staple in the area for so long due to a number of reasons, but it starts with their IPAs. Their “General Braddock IPA” is one of the flagship beers of Pittsburgh, and it’s joined by a phenomenal line of others. Their “Hazy IPAs” — New England style beers that have a juicier taste than the pinier flavor you might associate with IPAs — are go-tos. Lou is no exception, and is a masterful representation of what they do best.

Originated in 2013, Ales for ALS is a national initiative that was created by hop farmers Cheryl Hanses and Mike Smith, who have lived through multiple family members developing ALS, aka Lou Gehrig’s disease. So, they started a fundraiser, where participating breweries around the country use a preset selection of different hops, and create their variation of an IPA from it, with a portion of all the proceeds going to ALS research.

Brew Gentlemen’s version uses a wide array of hops — including Citra, Mosaic, Sabro, Simcoe — and a number of experimental hop blends. The result is an IPA with 8% ABV that nonetheless is immensely crushable: an easy drinker where the hops are present, but come together to form a juicy, fruity explosion. You’ll get as many notes of peach and pineapple citrus, as you will hop burn. And as it pours a beautiful light orange color. You’ll like looking at it as much as drinking it.

The Allegheny Overlook is a fantastic initiative for the city as a whole, a worthy way of driving foot traffic and community engagement right in the center of Downtown. But for beer lovers, it’s also a great excuse to get to try Brew Gentlemen on a regular basis. They’ve been a fixture for years, and now they’re right in the heart of Pittsburgh, as they should be.

Beer of the Week: Kellerbier