BEEBOY Honey is so local, it was likely harvested in the same neighborhood it was consumed | Taste Magazine | Pittsburgh | Pittsburgh City Paper 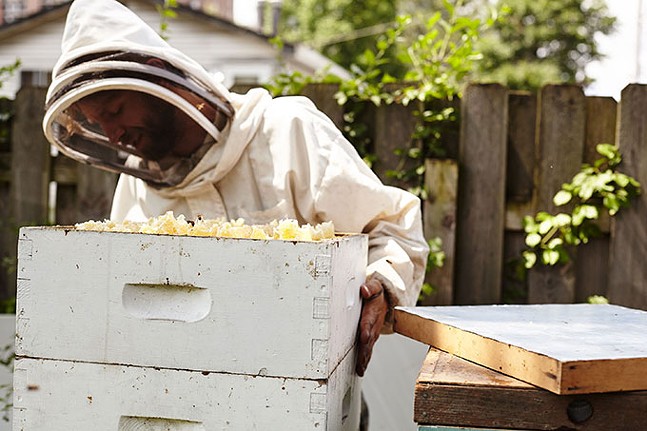 Getting locally produced honey from BEEBOY Honey is no easy task. It’s not sold at farmers markets or grocery stores. It sells out about a month after it’s harvested, and that’s it. Beekeeper Randall Hall doesn’t push his bees any farther than they’ll naturally go and makes his local, urban honey in limited quantities, selling to a few select coffee shops and breweries, or people who contact him directly.

“I’m from a newer school of beekeeping … It’s much more sensitive to the needs of the bees versus the economic benefit from harvesting honey,” says Hall. “I do make money, but that’s not my goal anymore. My goal is mostly to keep the bees healthy and to do the best job I can as a caretaker for them.”

He manages several hives around town, sometimes in friends' yards or on the property of a business, like the one at Spring Hill Brewing where the honey gets used in beers. “I have way more people asking me to put bees in different locations than I could possibly keep up with,” he says.

BEEBOY can also be found at 4121 Main in Bloomfield, Espresso a Mano in Lawrenceville, and Shadyside Nursery.

Part of his work as a beekeeper is simply raising awareness about bees, and reminding people that not only are they all around us, but their existence is a massive and necessary benefit to the ecosystem. Hall sees some of the rising interest in urban beekeeping and local honey as stemming from heightened awareness of the plight of bees. A little over a decade ago, scientists and beekeepers began noticing Colony Collapse Disorder, which caused an increasing number of dead bee colonies and fears about the future of the bee population.

“I’m always encouraged by how much knowledge the public has about bee crises,” he says. “People come pretty well informed about this stuff.”

Hall’s focus on the well-being and survival of bees doesn’t produce as much honey as high-volume beekeepers who cut corners by giving the bees antibiotics and feeding them sugar water. But it does give BEEBOY Honey the advantage of being hyper-local. Hall will often sell the honey in the same neighborhood in which it’s produced.

“I’ll make honey in July in Oakland and I’ll sell it as close to Oakland as I can, and really let people know that this is exactly where and when it came from,” he says. “I started doing that at the beginning just for myself ’cause I found it interesting, and it’s turned out to be that people really respond to that.”

With this model, the more that people know about where their honey comes from, the more attention they pay to when the bees are most active.

“I’m trying to get people to think about what trees are blooming, what flowers are coming up next month. Has it been raining a lot? I wonder if that affects the bees?”