The production projects a certain self-conscious charm, but can't compensate for an overwritten script 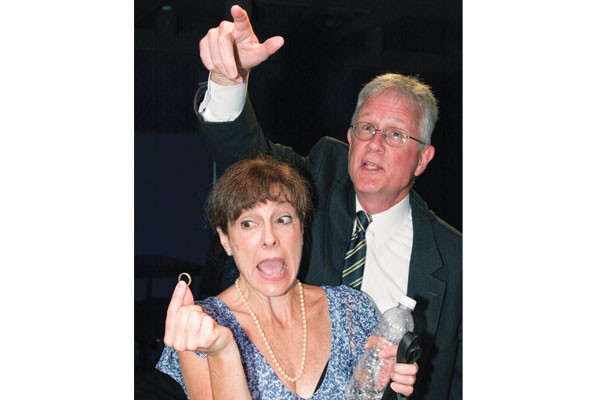 According to an aphorism in Becky's New Car, when a woman wants a new car, she really wants a new life. Thus, we are told without subtlety, the title character of Steven Dietz's 2008 comedy is suffering a mid-life crisis — with some nasty collisions along the way. The Little Lake Theatre's production projects a certain self-conscious charm, but can't compensate for an overwritten script.

There's a farce in Becky fighting to emerge, but the pace is dragged down by long rhapsodies about — no foolin' — cars. The plot is layered with ever-more-unlikely situations and personal complications among sharply drawn middle-aged characters, with a couple of young adults tossed in for variety if not credibility, all manfully (and womanfully) tackled by a well-selected cast. Directed by Sunny Disney Fitchett, the show delivers plenty of laughs. And Little Lake's intimate theater in the round is perfect for Dietz's dissolving of the "fourth wall."

Lisa Hoffmann keeps the charm level high in the demanding role of Becky, stuck in a nowhere job and a moribund marriage, suddenly tempted into a series of deceptions and betrayals. Honesty is not standard policy for most of the characters, and some of the laughs are bittersweet as the collateral damage is cleared.

As a reflection of reality, Becky's New Car is tenuous and unkind, but it makes for well-crafted theater and enough humor for the trip.