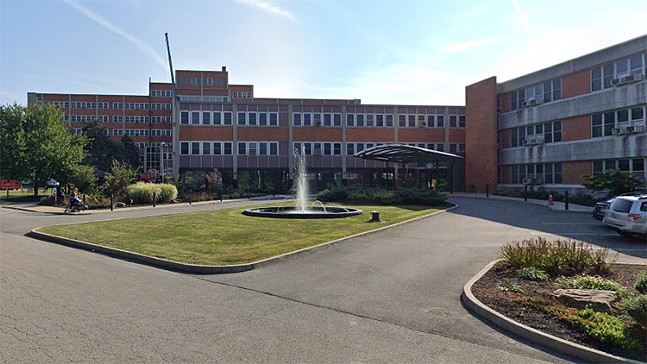 “We are really focused on one topic and that is the horrible tragedy that has occurred at Brighton Rehab and Wellness Center,” said Lamb during the town hall, “where so many members of our community have lost their lives to COVID-19. I ask everyone who is listening to this call to take some time out later and pray for the victims of this disease and their families.”

Lamb said his office is looking into why the cases and outbreak have been so high at Brighton Rehab.

SEIU Healthcare Pennsylvania represents the workers of Brighton Rehab, and president Matt Yarnell said at the town hall that there is a shortage of Personal Protective Equipment (PPE), like gowns, at the nursing home.

“The workers and residents at Brighton, they really need the community to have their back right now,” said Yarnell. “The single biggest need right now at the facility is access to PPE. As a union that is statewide across the commonwealth, we continue to be very alarmed about a swift reopen when there is not a stockpile of PPE for health-care workers.”

Some have been critical of Lamb’s comments, particularly some on the right who claim he is inflating numbers about PPE shortages. Many hospitals in the state have reported no shortages of PPE, while other health-care facilities and workers, like nursing homes and personal-care workers, have reported low or even no PPE supplies.

In fact, one participant in the town hall asked Lamb why he was “spreading a false narrative” about PPE shortages.

Lamb replied saying, “It is not about what the federal government has given us in the past, but how they are going to be supporting our state going forward.” Lamb said he spoke with state officials last week, who said the federal stockpile was no longer able to provide Pennsylvania with certain PPE like gowns.

Ray Barishansky, of the state Deputy Secretary of Health, acknowledged during the town hall that the federal government did respond recently and help supply the state with N95 masks, but noted that currently there is a statewide paucity of gowns and face shields.

“We are looking under every rock, every nook and cranny to make sure we have the PPE for our commonwealth,” said Barishansky.

Today, the New York Times reported that President Donald Trump has announced the nomination of a new inspector general at the Department of Health and Human Services. This nomination comes on the heels of a report the current DHHS head released last month that highlighted severed PPE supply shortages and testing delays at hospitals across the country.

Even Republican Beaver County Commissioner Daniel Camp acknowledged that many in the county are worried about being able to acquire PPE. Camp didn’t mention any shortages at health-care facilities in the county, but did say his office has been fielding many calls from small businesses looking to find PPE.

“These mom and pop shops on Third Street in Beaver, if they can’t get their hands on the PPE to provide to their employees, they want to know if they can open,” said Camp during the town hall.

In the end, Lamb said PPE shortages will likely affect the future of Beaver County, and whether or not the county can reopen safely. He said large-scale testing will be necessary before regions can get back to normal, and that PPE should be replaced after each new test. So far, Pennsylvania has tested less than 2% of its total population.

“Ultimately, us going back to normal, and getting business restored, is going to depend on everybody having the confidence to go outside and live their normal life without being afraid of getting this virus,” said Lamb in his closing remarks. “People will only have that confidence, that psychological comfort, and willingness to go be in crowds, spend money, and start new businesses, when we are testing large quantities of the American people and those tests are coming back negative. And that will only happen when we produce enough PPE for people do to the tests.”