More than 100 students gathered outside the University of Pittsburgh's student union March 29 to prepare for a larger march and rally marking five years of war in Iraq. In front of the crowd, sociology professor Mike Epitropoulus spoke to the students with the kind rhetoric that keeps conservatives in Harrisburg awake at night.

"We have to remain committed to peace, to the struggle, to dissent," he said through a megaphone. "We are the majority."

University tour guides led prospective students past the demonstration, and a group of fewer than 20 potential future enrollees and their parents gave a sideways glance as Pitt student Marc Mancini began to speak.

"Osama bin Laden is a terrorist?" Mancini yelled. "George Bush is a terrorist. ... The ones calling the shots are not the ones getting shot."

Some time before 1 p.m., the crowd marched up Fifth Avenue to an already-in-progress rally near Craig Street. A women's feeder march, which emerged from the dinosaur near the Carnegie Museum of Natural History, joined the main rally at about the same time.

Before the march, speakers outlined the basic platforms of the day -- bring the troops home, take care of them when they return, and give reparations to Iraqis -- but some tried to connect the crowd to a more complex message.

David Meieran, of the Thomas Merton Center's Antiwar Committee, pointed out that they were standing next to the Software Engineering Institute, a common target of anti-military activity because of the Department of Defense contracts it receives.

"This institution may not look like a military base, but really it is," Meieran told the crowd. And to the young people, he added, "Think long and hard about the functions of Carnegie Mellon University and [the] RAND [Corporation, a nonprofit think-tank that provides military research and has an office in Pittsburgh], and last but not least the University of Pittsburgh."

Vanessa Wills, an organizer of the student march and member of Pittsburgh Students Against War, reassured the crowd that the students were paying attention.

"I don't want to hear anything about the youth being apathetic. The youth are here," she said. "There's a front of the war in Iraq that is right here. And we see it when our tuition goes up and our wages go down."

In an effort to form a broader union, the organizers focused on the war in Iraq. As Meieran said, "Today our message is pretty simple, [but] for some of us, it's not just this war. ... This is just one day out of a much larger picture."

The parade of people then started to move down Fifth Avenue, from Craig Street to McKee Place, and then back up Forbes Avenue to Flagstaff Hill. Estimates of the march's size vary greatly; one media account estimated a crowd of 400, however, march organizers estimated 1,000.

A line of eight police officers on motorcycles rode in front of the demonstrators. Student groups formed the first contingent of marchers. In the rear, the crowd was quieter and older, holding signs for Pax Christi and Physicians for Social Responsibility. Somewhere in the middle were the black flags of the Pittsburgh Organizing Group, who marched from Garfield to Oakland prior to joining the larger pack. Thirteen mounted officers trailed the demonstration.

At the intersection of Forbes and McKee, the parade ran into about a dozen young Republicans in suits who began heckling and debating them. There was little engagement, however. As the protesters continued on their route, the Republicans did not follow.

Mike Nerozzi, second vice president of Temple University's College Republicans, said they were in town for a college Republican convention; the suits were for an event that required business formalwear, he said, not meant as an ironic fashion statement.

The Republicans were unaware of the march before they found it on the street: "We kind of walked right into it," Nerozzi said.

"They seem to not be recognizing the sacrifice the troops are making," he added. When asked about the number of veterans who joined in the protest, Nerozzi pointed out that most of them appeared to be Vietnam vets and "they're two different wars."

Among the Vietnam veterans in the crowd was Forest Hills council member Marty O'Malley, who voluntarily served in Vietnam from December 1965 to December 1966.

Unlike some others, O'Malley did not come home and immediately enlist in the antiwar movement. "I kept my fucking mouth shut," he said, and it wasn't until 1971 that he joined Vietnam Veterans for Peace.

After the war, O'Malley said, he went silent for decades. So much so that people who'd known him for years were unaware that he was a veteran. Then in January 2003, "I realized [President George W.] Bush was going to start another war ... [so] I came out of the closet.

At the end of the march, the protesters climbed the muddy turf of Flagstaff Hill and looked down upon a collection of symbolic black coffins that were placed on the concrete stage.

A collection of religious and spiritual leaders pieced together an interfaith memorial service for those killed on both sides of the war.

"The people who are represented by these coffins can no longer offer their words," said Rev. Dr. Randall Bush, of East Liberty Presbyterian Church. "Let not their legacy be silenced. For you are the bearers of their words now."

In a speech punctuated by silences, the Zen Center of Pittsburgh's Rev. Kyoki Roberts said, "I think each and every person who came here today has seen into something. ... This interconnectedness is your original nature. It's our original nature."

After the memorial service, the day concluded with a rally on Flagstaff Hill.

"Thank you for supporting your troops, which is what you are doing," said Sgt. Helen Gerhardt, who served in Iraq from June 2003 to July 2004. "I, as a veteran, feel a responsibility to make reparation for the damage I have done."

"He left behind a daughter," she said. "She can only talk to her dad at the cemetery.

"The cost of this war is so much more than money. ... Some of our troops have been there two, three or four times. It's too much."

After the rally, Gerhardt said in an interview that the troops' "basic needs were not met" in Iraq. She said that her unit wasn't given armor and had to go Dumpster-diving for cots.

Underscoring the range of opinions in this opposition coalition, however, Gerhardt did not fall in with those calling for an immediate withdrawal.

"I think we need to leave in a responsible way," she said, with a "Veterans for Obama" button pinned to her coat. "Colin Powell said, 'If you break it, you've got to fix it.' We sure helped break it." 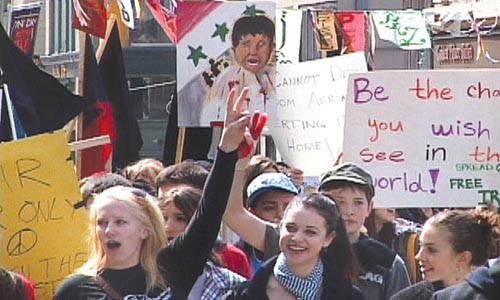