"At the Copa! Copacabana! Hottest spot north of Havana!"  You know, this may be the first time I got a song stuck in my head before I saw the show.

Based on the 1978 hit single "Copacabana," by Barry Manilow (with lyrics by Bruce Sussman and Jack Feldman), Copacabana -- as a musical -- started life as a 1985 TV movie. It became a casino show, then opened in London as a full-fledged musical in 1994. Pittsburgh CLO presented the American premiere in 2000, after which it toured and whatnot. Now, CLO brings it back home.

The more astute among you will notice that the word "Broadway" doesn't appear in that itinerary. When you've got a property called Barry Manilow's Copacabana and can't get investors for a New York production, that can only mean the investors have seen it.

For the life of me I can't imagine why this show is so dreadful (and by that I mean the script, not the production). This should have been a no-brainer: You simply open with Lola sitting there, faded feathers in her hair, remembering her youth and, through the magic of live theater -- whoosh! -- we're transported to an earlier time of vibrant costumes where Lola's tragic but tuneful tale plays out.

But for some reason, instead the book-writers (Manilow, Sussman and Feldman) create this idiotic framing device involving a modern-day songwriter, Stephen, who's writing a song called "Copacabana" as an anniversary present for his wife. (Uh ... whatever happened to jewelry?) Then we go back in time, to where Steve is now Tony the bartender -- also a songwriter and hoofer -- and his wife is now the showgirl Lola, and somebody named Rico drugs and kidnaps dancers and takes them to his nightclub in Cuba where, if they don't perform well, they get shot.

If that makes sense, I'm not telling it right.

Along the way there's some songs by Manilow and, while pleasant enough, they are completely unconnected to the story. The whole thing builds to a climax which ... well, let's just say that if Lincoln had seen it he would have shot himself.

The set consists of a bunch of drapes flown in from the flies and three staircases they keep pushing all over the stage in hopes of making us think there's more.

Still, see it at your own peril. 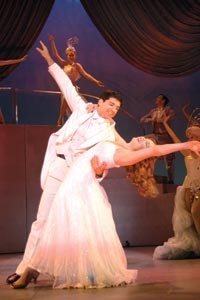