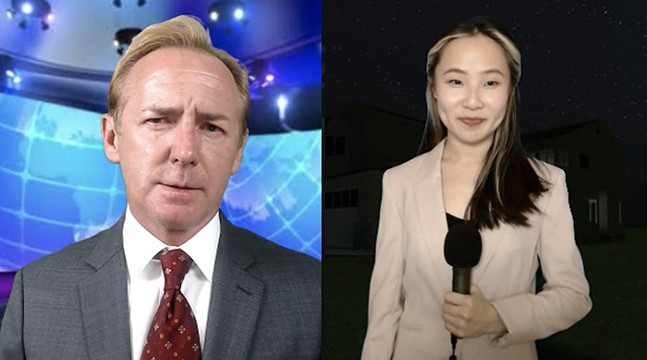 David Whalen (Frank in the Studio) and Mei Lu Barnum (Constance at the Home) in barebones productions' Tragedy: a tragedy
Patrick Jordan, the artistic director of Braddock theater company barebones productions, doesn’t skip a beat as he stops mid-Zoom interview to wave off camera at his two-year-old daughter who’s just entered the room on her way to the bathroom.

“Sorry,” he pauses mid-sentence. “Hey Pepper!” You can hear her singing to herself in the background before a door closes and he picks right back up where he had stopped. You can tell he's a pro at this Zoom thing, and it's no wonder.

As we talk online from our different parts of the city, Jordan is sitting on the same couch, wearing the same headphones, in front of the same wooden wall paneling where he’s been sitting for over 180 nights on camera for “Alone Together Pittsburgh,” the livestreaming talk show he launched with some friends back in March 2020, soon after the lockdown for the pandemic began.

For the past year, “Alone Together” has been his way of giving back. An actor himself, Jordan says he saw it as a community service, airing it multiple times a week on Facebook live. With the arts and culture scene shut down, he brought a wide range of performers and eventually other members of the community (including, full disclosure, myself) on his show to give people an outlet to perform, talk, and be together.

Now, two months after the show’s first anniversary with almost 600 guests under its belt, the city is starting to see pandemic restrictions lifted with more and more folks getting vaccinated and coronavirus numbers starting to fall, leading to arts and theater companies once again announcing live and in-person performances.

The Man, the couch, the wood paneled wall: Patrick Jordan on "Alone Together Pittsburgh"
And how is barebones productions celebrating this momentous occasion? With a three-night run of Will Eno’s dark comedy Tragedy: a tragedy, the company’s first-ever fully digital theatric production. Yes, digital.

“This is like a sendoff,” says Jordan. “An ode to lockdown.”

Tragedy, livestreamed May 21-23 and available on-demand May 26-30, focuses on an existential news broadcast that “may or may not be the end of the world,” the perfect background for barebones’ existing livestreamed set-up, according to Jordan, who’s directing the show.

You’ve got a newscaster, Frank in the Studio, “the last honest man in American media,” played by longtime Pittsburgh favorite David Whalen; Constance at the Home, played by Mei Lu Barnum, providing the human interest element in the show; Michael, Legal Advisor, played by Billy Jenkins; John in the Field, played by Gabriel King, and looking reminiscent on barebones’ video teaser of former WPXI newscaster Dee Thompson (anyone else remember when they’d always send that poor guy out in only the worst weather conditions?!); and Witness, played by Dave Mansueto, one of Jordan’s collaborators on “Alone Together.”

The play rips on fake news and even though the script was written 20 years ago, Jordan says it’s still timely today, with so many different types of media now existing in the world and all of them trying to be different and “staking their claim for certain kinds of territory.”

“I think there's problems with the news media everywhere, but as it relates to this play, you kind of see these reporters kind of devolving throughout it where the camera’s still rolling,” he says. “They're waiting for this thing to happen, it hasn't happened, and they're starting to, like, almost get primal.”

The actors will all perform each show live for the first three nights, and then the best of the three will be chosen for the on-demand recorded option.

Virtually has also worked well during rehearsals for the actors who are scattered all over the place, according to Jordan. Two are in Pittsburgh, two are in New York, and Jenkins?

“He’s retiring from the Marines tomorrow, so he’s been in, like, a barracks, rehearsing with us on his phone, speaking softly,” says Jordan. “It’s pretty funny. He’s like, ‘Hey guys, is it cool if I take off a little bit earlier? I got to jump on a plane,’ and he sent us a picture of himself, like, literally hanging off the door of a plane flying over the ocean.”

Barebones is using the same equipment for Tragedy as they used during “Alone Together,” though there are some perks this time around. Some actors will be equipped with green screens, and Jordan mailed all of the cast microphones. And the actors are getting paid. ("Alone Together" was — aside from a few sponsors which they used to upgrade equipment and donations which came in during shows that they gave back to the guests — a volunteer venture.)

But he doesn’t plan on having virtual plays be a full-time gig. “We’re gonna hopefully be back in Braddock soon and doing some shows, and I’m excited at the prospects of being able to get back to this,” Jordan says. “I’m itching like crazy to get back to work.”

As for “Alone Together,” with gathering restrictions ending on May 31, Jordan sees an inevitable ending to the talk show in the near future. But he’s hopeful he might be able to reach 200 episodes before calling it quits.Tragedy: a tragedy. 8 p.m. Livestreamed Fri., May 21-Sun., May 23. On-demand Wed., May 26-Sun., May 30. $15-45 (Pay what you can.) barebonesproductions.com

Rules of Seconds at barebones productions

The Elaborate Entrance of Chad Deity at barebones productions