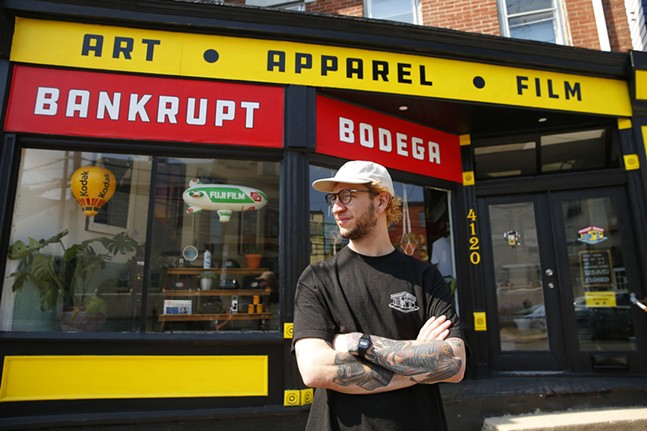 CP Photo: Jared Wickerham
Pat Bruener, owner of Bankrupt Bodega, poses for a portrait outside of the shop.
Walking into Bankrupt Bodega's eclectic new space in Bloomfield gave me similar vibes to hanging out at my local skate shop as a kid. Given the tube televisions, vintage cameras and clothing, and colorful images hanging on the walls, it was like stepping back in time. But owner Pat Bruener has concocted the perfect space in the 120+ year-old building for his new venture, which will have its official grand opening on Sat., April 10: a combination throwback shop, film lab, and gallery, featuring his own ongoing exhibit, Searching for Pittsburgh Nostalgia.

In his artist statement on the wall, Bruener talks about growing up in Forest Hills, going to Kennywood, and his memories of the Strip District before developers recently constructed multi-million dollar homes. The photo series that he originally started last summer, around the same time he began his film lab and processing business, has led him to this point in bringing the ideas all together into one place.

CP Photo: Jared Wickerham
Custom sweatshirts in the process of having images stitched on.
His photographs, tying in with the Bodega's vintage theme, are framed inside of old windows salvaged from Pittsburgh-area homes. If customers are out of wall space at home for a framed print, Bruener also stitches his photographs on to many of the vintage clothes and custom sweatshirts for sale in the shop, including an old Marlboro cigarette jacket. 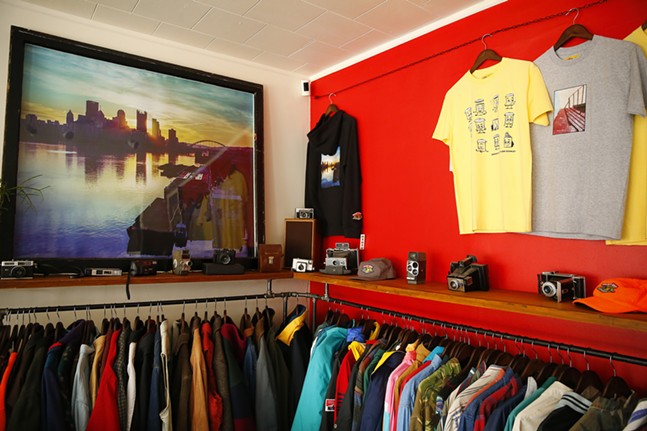 CP Photo: Jared Wickerham
Vintage and custom clothing racks as well as works of art hang on the walls inside Bankrupt Bodega.
Another aspect in Bankrupt Bodega includes a film lab, which Bruener says will process between 50-100 rolls of 35mm and 120 film in both color and black and white, usually within a 5-7 day turnaround. A number of film cameras and 35mm film in the glass case are also for sale — all tested and including brand new batteries for any aspiring photographer to get started with (I would recommend the old Nikon FM).