In Zoe Lister-Jones’ dramedy, a couple find it helps to sing about what’s wrong with their marriage 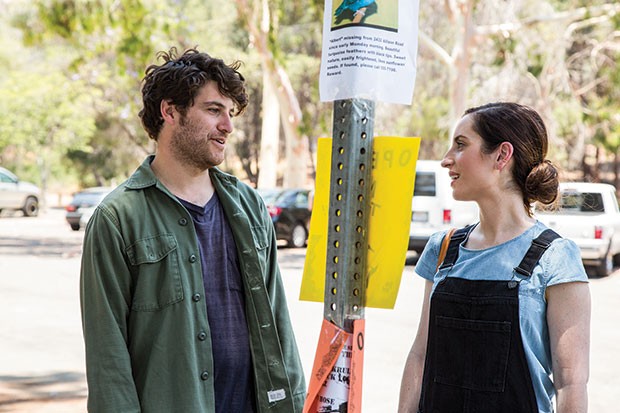 Not quite in tune: Adam Pally and Zoe Lister-Jones
Starts Fri., June 30. Melwood

Anna (Zoe Lister-Jones) and Ben (Adam Pally) seem like a fun young couple — living in a cute Los Angeles bungalow and … fighting constantly. She’s uptight, he’s a slacker — and as we witness in Band Aid’s opening scene — a complaint about unwashed dishes escalates to someone bringing the Holocaust into the squabble. It’s exhausting, and perhaps this marriage can’t be saved.

But in this dramedy — written and directed by Lister-Jones — an unorthodox form of therapy materializes. After an impromptu jam session at a kids’ rock ’n’ roll-themed birthday party, the couple are motivated to dig some guitars out of the garage. Then, they discover that turning their complaints into songs is super helpful. (Before you snark at too-precious hipsters singing about their feelings because it’s twee-ish, recall that Fleetwood Mac made a zillion dollars slinging songs about the band members’ relationship woes.) They enlist “weird Dave” (Fred Armisen) from next door as a drummer, and even take the act to a couple of open-mic nights.

But it’s not all laughs: Their troubles are rooted in some real problems, including frustrated creativity (she should be writing, and he should be making art), money (Anna makes ends meet by Ubering), and the inability to talk about a traumatic event. The film winds up with some men-are-from-Mars-women-are-from-Venus explanations that felt a little reductive and outdated; there’s blame on both sides of this strained relationship and I’m not sure it’s necessarily gender-based. But I respect that despite some of the exaggerated silliness (Dave’s at-home situation is strictly for comic effect), Lister-Jones does keep the exploration of the marriage grounded in reality: The problem is a lack of honest and empathetic communication — even if the larger conceit of turning sniping into heartfelt song lyrics is a practical solution. Ultimately, the songs help spur conversation.

Band Aid pokes some fun at Los Angeles, today’s obsessive parenting and how every ordinary aspect of life now seems like competitive performance. And TV-watchers will see plenty of cameos from an assortment of actors, including the great Susie Essman (Curb Your Enthusiasm) as Ben’s mother, and Parks and Recreation’s Retta, as a fed-up therapist.