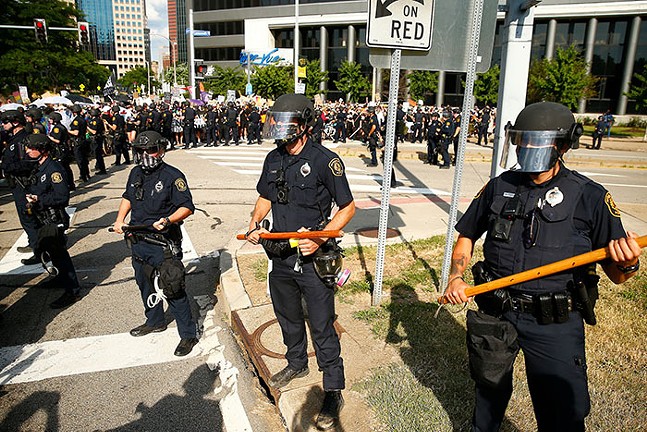 CP Photo: Jared Wickerham
Pittsburgh Police in riot gear at a Civil Saturdays protest on July 4, 2020.
While the votes are still being counted in Pennsylvania, not everything is as close a call as the presidential election. In the city of Pittsburgh, voters overwhelmingly passed a referendum to expand the powers of the Citizen Police Review Board.

The ballot question, which passed with 78% of the votes, asked whether or not to amend the city's Home Rule Charter "to allow the Board to require police officers to participate in investigations, conducting performance audits of the Police Bureau, and preventing the removal of Board members except for just cause and with City Council approval."

The passing of the referendum comes after a summer filled with Black Lives Matter protests against police brutality in Pittsburgh, and across the country. Residents have been voicing demands for various types of police reform, especially after multiple incidents in which Pittsburgh Police confronted protesters with force, including using chemical spray like tear gas and projectiles like rubber bullets.

"I believe we can work together to facilitate police reform,” councilor Ricky Burgess, who introduced the ballot measure in June, told TribLive. “This is part of our agenda and campaign to make Black Pittsburgh matter.”

While the referendum does not directly affect how police officers conduct themselves — the CPRB does not have the power to enforce conduct — it is a step toward greater accountability for officers' actions while on duty.

According to PublicSource, "Between 1998 and 2017, 3% of the more than 3,000 complaints CPRB received resulted in public hearings, one of the final stages of the board’s process." The CPRB faces difficulty taking action because it does not always have the cooperation of the Fraternal Order of Police (FOP), the union that represents the Pittsburgh Police.

"They could put that on the referendum, the citizens could vote for it, but if challenged by the Fraternal Order of Police, that referendum would become null and void,” said Swartzwelder.