Very rarely have I seen a local band and been able to retain the entire melody of one of its songs, singing it to myself intermittently over the following week. Yet that's what happened with Ball of Flame Shoot Fire and its song "Vroom Vroom." And that's the reaction indie-rock fans should have to the band's debut, Grumpy Little Bird. The quintet's youthful exuberance and sheer sonic ambition -- all five share vocal duties, and their chamber-rock arsenal includes organ, keyboards, trumpet and saxophone -- indicate the members are having a blast simply writing and playing their songs.

So what makes them different from the spate of "piano-rockers" that popped up in town four years ago? To be blunt, Ball of Flame is better informed. Instead of limiting themselves to mainstream influences such as Radiohead, Coldplay and Ben Folds, these kids embrace a list of mixtape material as long as your arm -- it's like the ultimate local "Pitchfork band" come to shuddering life.

And I don't mean that with any disrespect. Stark originality isn't as important these days as the ability to create an emotional frame of reference, and these guys ring all the art-pop bells. There's the jaunty horn lines on the lead-off, "Red Meat"; the waltz "Flaming Wreckage," recalling Man Man's circus-rock; and the high-pitched prog-pop of "Rado," in the realm of The Arcade Fire or Dirty Projectors. The bouncy, intricate melody of "Vasco Da Gama" culls from Islands or Menomena. In fact, Ball of Flame really sounds like it's from Canada, where a lot of this stuff is happening.

Only the straight-ahead "Down the Street" is a bit of a departure, veering into WYEP power-pop. And although Jake Hanner (of local band Donora) succeeds behind the mixing desk in conveying the band's energy, the vocals could have been boosted here and there for better overall intelligibility.

Those peccadilloes aside, I'd call Grumpy Little Bird the first great new Pittsburgh record of the year, with the potential for a wide, yet whip-smart appeal. 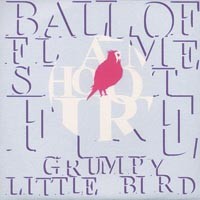